THE WHISKEY CHARMERS - THE VALLEY 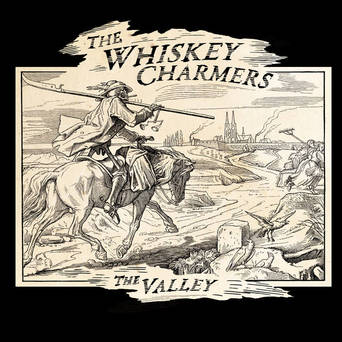 Here we go with what is, for me at least, yet another sub genre; this time it's 'country noir,' a phrase that I don't recall using before, but in this case it is one that is a perfect fit for The Whiskey Charmers with their cinematic, deep and often dark soundscapes. The depth comes from the quality of playing and Carrie Shepard's vocals rather than any over the top artificial production values, in fact as the listener gets into the album, as all who hear it will, it becomes clear that the instrumentation is very restrained and sparse
This is their second album and to my ears, whilst their debut was excellent, this recording leaves it a little in the shade, having pretty much defined their style on this album that has the subtlety of artists such as the Cowboy Junkies but with greater depth, textures and variety. The band consists of Carrie Shepard, who handles all lead vocals and acoustic guitar and Lawrence Daversa who plays electric and acoustic guitars, steel guitar and harmony vocals and shows incredible restraint in his inventive guitar playing, knowing that less notes often equate to more in creating an atmosphere of great depth and quality. Brian Ferriby played drums and tambourine with Daniel "Ozzie" Andrews on upright bass and electric bass David Roof played organ and bass on two tracks and 'Wolf' was on bass on four songs. I mention everyone simply because no one displays any histrionics, all playing with great restraint and skill throughout the album. All of the songs were written by Carrie Shepard with the exception of "Desert", "Coal" and "Meet Me There" which were written by Carrie Shepard and Lawrence Daversa, with the album being produced by The Whiskey Charmers
In some ways Carrie's vocal is reminiscent of Rachel Brookes with her ability to create a haunting sound in the most sparse of arrangements purely through her beautiful vocal qualities. Of course none of this is harmed by the band arrangements and playing that not only emphasizes Carrie's vocals but also add great depth to the songs that often have a spacy arid atmosphere
The album creates the impression of a varied instrumentation, as do the tempos, but in actual fact nothing gets much above a sedate mid tempo and as already illustrated the sound is sparse and the named instruments are few. What creates the impression is the subtlety of the playing and the thought given to the arrangements with some songs having the same instrumentation as its predecessor but with an entirely different effect on the listener as well as the musicality and texture. Of course much of the credit for this has to go to Carrie's tremendous vocal performances that keep everything rooted, yet at the same time bring great diversity to the songs with her ability to evoke such a variety of emotions.
Added to this the guitar sound adds incredible depth and variations to the songs whilst the bass and metronomic percussion not only help build an incredibly solid and varied foundation but also add to the depth.
The album gets underway with a lovely mellow acoustic guitar intro joined by percussion and Carrie's sultry vocal on Desert, a beautifully haunting tale on which the sound is filled out by male harmonies and melodic steel guitar. It is a song that has depth as well as a broad arid atmosphere as befits a composition with this title, whilst the sense of drama the story creates has to be heard to be believed. On The valley, percussion and tuneful guitar get things going on another excellent song, this one the album's title track, on which Carrie's vocal is supported by an atmospheric male harmony on a song that has a deep bluesy guitar but a tempo and all round sound that has a virtual  'rockabilly' feel. A lovely twangy guitar opens things up with the percussion and throbbing bass on Meet me there another song that has a deep haunting, arid atmosphere with Carrie's vocals at their gentlest creating an almost eerie otherworldly atmosphere. A lovely melodic guitar intro with percussion gets things off to a great start on Songbird before Carrie's vocal comes in on yet another excellent song. The suppressed keyboards in the background add depth but it is the tremendous guitar sound and Carrie's vocal that is the key to this and just about every song on the album. That should not lessen the percussion, bass and ancillary instruments which are all of great quality. Last but not least is Red wine with its acoustic guitar and twangy melodic guitar providing the intro, leading into Carrie's lovely vocal with throbbing bass and restrained percussion on a song that has similarities to the sound of Cowboy Junkies but again, with more depth and atmosphere.
There is a beautifully subliminal calmness to Carrie's lead vocals throughout the album whilst all around her there is a dramatic depth to the music and lyrics making this a collection of tremendous counterpoints. Just two albums in to their recording career and I genuinely list the Whiskey Charmers as one of my favourite 21st century bands. Buy this album and its predecessor and I'm pretty sure you will too!