DANA IMMANUEL & the STOLEN BAND -
COME WITH ME 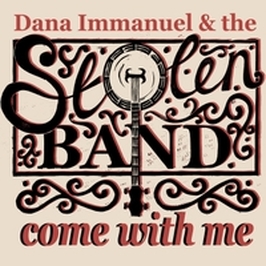 I was looking forward to seeing Dana Immanuel and the Stolen Band at this year's Maverick Festival but circumstances conspired and I was only able to see a couple of their songs. That was enough though to impress me and create the impression that this was a band that had much to say musically and were set to stay around for a long time. The enthusiastic crowd in a packed 'Barn' seemed to agree with this impression as well!
The London based band consists of Dana Immanuel on banjo, vocals and guitar, Feadora Morris on guitars and banjo, Blanche Ellis, vocals, washboard, thimbles, Maya McCourt plays cello, vocals, single bass and Hjordis Moon Bradford, cajon and foot tambourine. All of the songs were written by Dana with the exception of Doc Pomus and Mort Shuman's Viva Las Vegas! The sometimes unusual instrumentation adds to the originality of the recording, giving the band, even at this early stage a recognizable individuality that is comparable to no one else.
They play a mix of blues, country, bluegrass that perhaps veers towards 'old timey,' even rock, albeit one that could be country or blues rooted, music that can sometimes get cacophonous and then change to a gentle melodicism, an often strong element of swampy eeriness that sometimes stretches to an otherworldly atmosphere. Try slotting them into a narrow genre with that little lot! In a nutshell a hugely original brand of music that can sometimes be challenging but is always melodic and entertaining.
Lyrically punches are not pulled either with three of the ten songs being labeled (explicit) but the language always has a context in the songs on this album that goes from rocked up country to swampy otherworldly moodiness but is always melodic. Dana has previously released two solo albums and is blessed with a voice that covers just about every emotion from lovely soft femininity to a spiky and abrasive attitude that handles the variety of tempos and moods on this recording with ease.
We kick off with banjo and an aggressive guitar sound on Come with me, with Dana's voice having plenty of hard hitting attitude, albeit lovely and melodic, with the band joining her for otherworldly harmonies on the chorus and with an excellent guitar solo included. Clockwork is another song that is led in by banjo before being joined by fiddle, bass and Dana's melodic expressive vocal on an excellent song that has a slightly unusual but excellent arrangement and some lovely band harmonies. Achilles heel is a mid tempo song with percussive handclaps and banjo propelling the song, then Dana's expressive vocal comes in soon joined by band the harmonies, with an excellent guitar break on a song that is quite catchy and addictive. We're treated to a nice mellow intro with Dana's voice having a lovely floaty ethereal feel on Rock bottom before being joined by harmonies and a sound that gradually takes on more power at chorus time before falling back again, always with a banjo in the background. Finally, Devils's money starts with the chiming banjo, bass and washboard, leading to Dana's spiky and evocative vocal that is eventually joined by band harmonies on a song that is sparse, although not too much more is needed when a vocalist injects the power into a song that Dana proves herself more than able to summon.
I don't know if this is just a one off album or if Dana has found her musical soul mates and is going to continue in the band format but certainly these five young women together have made some great music on this recording and from the little I saw at Maverick but the enthusiastic reports I was given, it would be a musical tragedy if they don't carry on with this set up. This is a tremendous album by a band that has a long way to go before they finally exhaust their enthusiasm, skills and massive potential.