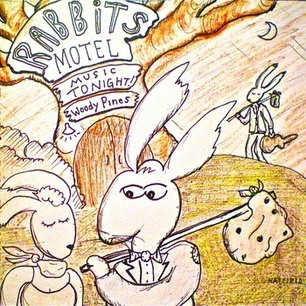 
I’ve seen Woody and his band perform live several times in recent years and felt their excellent music works better in a live situation than it does on record, despite the excellence of those recordings, an obvious reflection on just how good they are live! This album pretty much proves that feeling to be wrong, unless of course its just that this recording is more fully formed than previously? The listener can take great
pleasure from choosing which!
It really is an excellent album that does seem to me to include a greater stylistic diversity than eviously, from old timey, 50s rockabilly, a little bluesy r ‘n’ b, ragtime, even a vaudevillian jazziness, all cloaked in a soupy New Orleans atmosphere that includes a slightly edgy left of centre rootsiness. What glues these disparate influences  together is the quirky Woody Pines and band stamp that ensures a considerable degree of originality and a strong individuality to whatever they do, ultimately making them instantly recognizable. If the music doesn’t always manage that, certainly Woody’s appealingly distinctive vocal style would do so for anyone that has ever heard him. You can never get away from the easy going atmosphere he and the band create, whatever the subject matter or style, although that is not to say their music lacks drama. Far from it! It’s just that there is always the feeling that playing and singing the songs comes easy, allowing them to relax into what they are doing, a sure sign of great musical talent and, in all probability, far from as easy as it sounds!
Five of the ten songs were written solely by Woody and two are excellent renderings of traditional songs. Of the remaining three, two were co writes between Woody and the multi talented Felix Hatfield, with Felix being the sole author of the other, also playing banjo on one song. The album gets under way with Woody’s catchy swampy foot tapper, Like I Do, immediately followed by Felix Hatfields dramatic Railroad Vine. It is a dark, chugging, incredibly atmospheric tale about the life of an outsider that keeps to a slow moody tempo. Next is a tremendous version of the traditional Train that carried my gal from town, a much recorded song, with the definitive version recorded by Frank Hutchison way back in the 1920s. Woodys version is fairly obviously different but is pretty much equal in quality, with his sympathetic vocal and beautiful resonator guitar getting the very best out of what really should be known as a ‘classic’ song! Woody’s I love the way my baby, lyrically and musically evokes the blues of John Lee Hooker with a little soulful Booker T. organ propelling the song along at a nice gentle mid tempo. There is more of Woody’s beautiful sounding resonator guitar on the gently atmospheric Hobo and his bride, a dark haunting tale, made more so by the treated guitar sounds and the moodily plinking banjo. Spirits are soon raised by the strong traditional New Orleans ragtime flavoured Keep your hands off, propelled by heavy double bass and melodic clarinet  that give excellent support to Woody’s ‘chirpy’vocal. And so the album continues, diverse subject matter and mood swings, with every song well worth it’s place on this excellent recording.
Woody and his band are currently on tour in Britain. I would strongly recommend you check out their website to see if they are playing near you. If they are, don’t miss this tremendously talented band whose 'natural habitat' I still feel is in a live setting but this album does prove they also have pretty much an equal mastery of the studio environment.