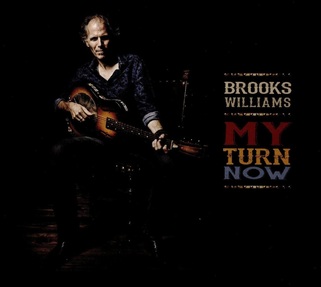 Brooks Williams's recording career has so far lasted for the better part of a quarter of a century and somewhere around twenty albums so the imperious quality and confidence that has gone into the makeup of this album should come as no surprise to anyone. Of course, to make a recording such as this, huge talent is a prerequisite and in Brooks Williams case there is an abundance of that with his vocal abilities alone being better than most but to that must be added the fact that he is also an extraordinarily gifted guitar player.
He has always been labeled a 'blues' musician but as is so often the case affixing any single generic label sells short a man who would be better referred to as a 'roots' musician. Splitting hairs maybe, but I don't hear in his music the work of a blues purist. Blues is certainly the tap root, but with elements, however small, of country and folk as well as perhaps a few other indefinable influences, even a whiff of jazziness? It is probable that he has been listening to and absorbing the blues for decades without living the poverty stricken itinerant life style of its originators. In that time he will have also absorbed other varied influences whilst playing in a loose generic style that was totally natural to him rather than merely becoming a copyist, thus giving his music a uniqueness and originality that many don't give themselves the chance of achieving.  Having said all that there is a strong thread of high quality blues that underpins this talented musicians work throughout not only on this excellent album but also its predecessors, at least the dozen or so albums I have heard, in many ways making him one of the most consistently excellent musicians in roots music.
On top of all this is his songwriting which stands comparison with virtually any of his peers. For this recording Brooks himself wrote seven of the eleven songs, with another two being traditional, plus one written by Mose Allison and another by Kris Kristofferson, a combination that gives a clue to some of his influences, albeit a vague as well as basic one! Helping out musically was Chris Pepper on drums and percussion, with the bass playing shared between A. Murray Khan and Richard Gates, Sally Barker adding some gorgeous feminine backing vocals and Brooks taking lead vocals and a variety of guitars with perhaps the resonator being to the fore. Whilst the instrumentation is relatively sparse the sound is still full and clear with each instrument clearly defined giving the recording a little polish, but in exactly the right places, with a lovely reassuring warmth thanks to the terrific vocal performances and some memorable melodies.
Whilst this may not be the deep rural blues of Patton, Johnson, House et al or the electrified and electrifying Chicago blues, in many ways the blues elements are just as strong simply because Brooks Williams has a deep and heartfelt understanding of the genre and rather than trying to copy anyone, as many do, he has his own natural style. That, in its own way, brings a strong feeling of authenticity because of the lesser, but still definable elements of "white man's blues," country as it is commonly known and a little of the folksiness alluded to earlier.
The album gets underway with Crazy dance on which there is a chunky percussion and melodic guitar sound with Brooks's bluesy vocal at the same time including a little jazziness on an excellent mid tempo song that is both catchy and melodic. Things slow a little on Nine days wonder, with the bass and percussion still more than adequately rooting the song allowing Brooks tremendously dexterous guitar playing to meander at will throughout the song with his vocal beautifully contrasting with Sally Barkers femininity. Year began is a lovely moody ballad with Brooks vocal at its warmest and accompanied by Sally Barkers lovely harmonies, with melodic resonator guitar and mandolin supported by the bass and percussion adding a lovely depth to the ebb and flow of the song. It is easy to imagine this song in other hands becoming a gorgeous country ballad; in fact this version is not a million miles away from that! Mose Allison's Your mind is on vacation opens with a distorted guitar sound and hard driving percussion and bass and is gradually taken over by some melodic twanginess at a speedy mid tempo. There is a lovely duel between the twang and a harmonica giving the song a feeling of both blues and country, albeit with the country side slightly suppressed. On Joker's wild there is a nice light guitar sound that gets things going before being joined by the ubiquitous bass and percussion with a little lightness from the mandolin then in comes the duet harmonies of Brooks and Sally on a deep bluesy tale. Final mention goes to Nobody wins an excellent version of a Kris Kristofferson tale of heartbreak with lovely resonator guitar sound and Sally Barker exchanging verses with Brooks  before the two meet again on the chorus. The bass and percussion are as solid as ever but a little more restrained as befits a tale of sad reflections.
The tempo's, dynamics and subject matter vary beautifully on this album that has a quite addictive diversity despite its powerful blues roots. If you want an album that gives an idea of where the purity of blues comes from where it went and where it is now as well as influences and inflections that were picked up along the way you will not find a finer recording than this invaluable edition to the Brooks Williams catalogue.