DOUG SEEGERS – GOING DOWN THE RIVER 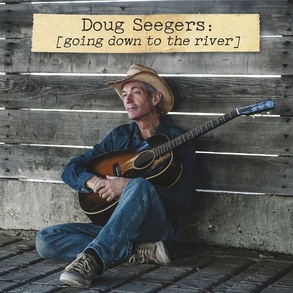 There can have been few if any better debut albums than ‘Going Down The River’ but it is a huge shame that a talent such as that possessed by Doug Seegers was not recorded until he reached his early sixties. Perhaps he is just a late developer, although it is more likely that this talent has always been there but life got in it’s way, but certainly in Doug’s case it is better late than never. Now let’s hope there are many more albums to follow this phenomenal release that will certainly figure strongly in my albums of the year.

Doug is an incredible songwriter, no doubt having lived some of his songs, certainly the dark ones, in a life that has been far too eventful to go into here. A potted history says that he eventually ended up living on the streets of Nashville thanks to his addictions and was discovered by Swedish country singer Jill Johnson who was making a documentary on down and out street musicians. She took him into the ‘Cash cabin’ and recorded the song, Going Down To The River which eventually became a hit in Sweden, soon leading to the recording of this debut album.

All of these tremendous songs were written by Doug Seegers except She by Chris Hillman and Gram Parsons and There’ll be no teardrops tonight by Hank Williams, those two songs pretty much explaining where, at least a large section, of this extraordinary artists roots lay. To say his vocals are expressive is an enormous understatement; if ever a man was born to make ‘country music,’ certainly Hank Snr was, but not too far behind is Doug Seegers. Dougs vocal style is easy on the ear and has a tobacco and whiskey soaked feel with a vocal  emphasis that shows there is no self consciousness or holding back, ensuring that every syllable of the lyrics has the right amount of emphasis, almost as if this is his twenty first rather than first release. His songwriting ability is without boundaries and includes honky tonk, country rock, rock ‘n’ roll, country, plus a style that seems to be rooted in jazz and western swing but is really neither, bringing yet more diversity to this album that I suspect I will be playing on and off for the rest of my life!

On this album Doug plays acoustic guitar and takes all lead vocals but is helped out by some hugely talented people such as Emmylou Harris, Al Perkins, producer and guitarist Will Kimbrough, who does an incredible job on production, and even includes a friend from the 1970s, Buddy Miller. When you put everything together the album, even on the softer ballads, has a distinct edginess and a total lack of any polish or sanitisation; in other words ‘real’ music, albeit real music that should have appeal for most people. Very few artists seem able to get the blend and flow of a song, and indeed a whole album, as perfectly balanced as this. Hank Williams was one, and although there have been a few since his passing, Doug can now be added to that very short list. Lyrically he is able to get the right balance between lifes sentimentality and it’s harshness with his twangy vocals giving an appealing evocation on every song he sings, added to which are his memorable melodies, a combination which gives the album, certainly in my case, an almost subliminal appeal.

It is not difficult to work out why Going Down To The River is the title song with it’s perfect combination of moods and atmospheres. It has an excellent guitar sound, allied to steel guitar, dobro and mandolin on a slightly sinister song that is perhaps too modern for ‘Oh Brother where art thou,’ but is a quite brilliant update of the generic strand. Somehow Doug is able to replicate that depth of feeling that was put into the old songs, something that runs through every song on this album. A quite stunning song on an album of stunning songs. That is immediately followed by She, an incredible version of the classic duet that seems to have an extra helping of heartfelt emotion and pathos on a tale that many people have recorded, often to the song’s and their detriment. This version, for me at least, is the best yet and with Emmylou Harris joining Doug on vocals, there is added credibility on a version of this exquisite ballad that I suspect will never be bettered. Pour Me is a tremendous ballad that is often evocative of Hank and includes lovely steel guitar, percussion and fiddle, as does There’ll Be No Teardrops Tonight another song that is vocally reminiscent of Hank, with Buddy Miller helping out on vocals on a tale that has a nice edge of intensity driven by fiddle and steel guitar as well as the always excellent percussion. Burning A Hole In My Pocket is an exhibition in versatility with it’s nod to western swing and jazz, something Doug carries out with seemingly extraordinary ease and skill even extending to a ‘big band’ sound. In many ways it has a similar feel to a countrified outtake from Donald Fagens ‘Nightfly’ but of a song that shouldn’t have been left off that great album! Finally, She’s In A Rock ‘n’n Roll Band includes the sound of a lovely banjo, percussion, electric twangy guitar, fiddle and steel on an uptempo country song that seems to include numerous aspects of country music’s sub genres, without actually being any of them on this almost sinister, slightly eerie tale.

Had Doug’s life been a work of fiction this would have been the huge world beating album released by the hero in a blaze of glory and to worldwide acclaim at the end of the story. One day the law of averages dictates that will happen. Perhaps that process is now underway for Doug Seegers.