American Roots 'Albums of the year 2016'

It's that time of the year again where we all come up with our favourite albums, something that, at least musically, is one of the most problematic aspects of review writing. I've known for some time what my 'favourite' album was likely to be but to break down the remainder into any sort of order, for me at least, is impossible. Favourites change from day to day but every recording in the following list has been my favourite at some stage of the year, if only for a few days and my opinion is governed by mood, climate, health and any number of other extraneous elements, meaning that whilst I can put the list in some sort of order one day, it is likely to change the next and the next and the next and so on and so forth! With that 'cop out' in mind (I prefer to call it honesty and integrity!) I've decided to have one absolute favourite and 35 others that I absolutely love, having broken that list down from an original collection of nearly 250 new albums that I've played this year. There are others that on another day could have got into the list but you have to stop somewhere, therefore in many ways this selection is quite unsatisfactory. The list will at least highlight some truly great albums most of which have been reviewed on this website this year and the few that haven't will be soon, hence the lack of comments in the list.
All of the albums are available in hard copy or to download from various www sites and in my world every one of those albums is absolutely essential listening! 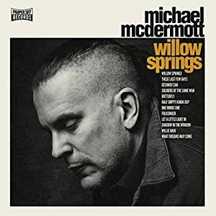 ​The www.americanrootsuk.com Number 1 album of 2016 is Michael McDermott's incredible recording 'Willow springs.' It is also likely that it's album of the decade so far and at the very least one of the albums of the first 16 years of this century! I'm unlikely to still be around in the year 2099 so can't say with absolute certainty that it will be album of the century!

The following list comprises 35 great albums in no particular order:

Rita Hosking - Frankie and the no go road

The Lowest Pair - Uncertain as it is uneven

The Westies - Six on the out

Them Coulee Boys - Dancing in the dim light

The Honeycutters - On the ropes

Eliza Mary Doyle - It ain't what it seems

Zach Schmidt - The day we lost the war

Daniel Meade & the Flying Mules - Let me off at the bottom

The Vaudevillian - Bringing Satan Down

The Youngers - Picture of you