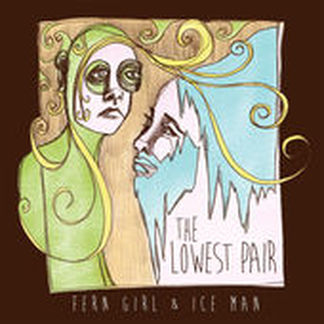 Having very recently reviewed another new album by the Lowest Pair I thought that trying to fit this one in would be overkill but the quality is so exceptional that I just had to relent. Regular readers will know that 'Fern girl and ice man' was released on the same day this year as the equally tremendous 'Uncertain as it is uneven.'
The Lowest Pair are the duo of Kendl Winter and Palmer T. Lee and although I've never met this couple (and probably never will) it is easy to tell from their recordings that they have no recourse to musical fashion but simply play the sounds they have a deep abiding feel and passion for in their own completely unique way, but one that if we have to be genre specific can be labeled as 'modern old timey'
On this album Kendl wrote nine songs and Palmer two with Kendl playing banjo, guitar, vocals and tambourine and Palmer much the same instrumentation but with the addition of harmonica. The recording was produced by Erik Koskinen who also plays bass, drums and lap steel, assisted on about half of the songs by Dave Simmonett on guitar and occasional fiddle by the talented Barbara Jean Meyers.
Whilst the sound is sparse there is so much depth and texture to every song thanks to the expressive vocals and the slight colour changes that are brought about by little fluctuations in tempo and subtle variations in the instrumentation. Their harmonies are not of the type often found in pop music where they blend and flow into each other seamlessly, often seeming bland in the process. Both Kendl and Palmer have their own individual vocal traits that clash in some ways but in others are perfectly suited. They don't try to blend the sound, bringing their own individual expression to the song, but at the same time working together to produce a sound and an atmosphere that no one else can replicate. Both are high quality completely unique vocalists steeped in 'old timey' music but able to bring a little modernity to the sound without losing the old 'hillbilly' atmosphere thanks to the depth of passion and intensity in their music.
There is a powerful eeriness alongside a quite compelling and addictive melodicism on this recording that gets under the skin and won't let go as the listener tries to work out if they are in the early 21st century or have gone back to the 1920s. Certainly some of the sound pictures that are painted and the sounds themselves would have been at home a hundred years ago, probably more so than nowadays, although these songs have more scope and are much more expansive than anything I've heard that was recorded in the early days.
The album opener is The River will, a tremendous duet that includes little more than their vocals, banjos and a restrained percussion on a song that despite the sparse feel also has a quite epic atmosphere. Their vocals are so incredibly expressive that listeners can lose themselves in the world that is created. There is a harmonica intro on Stranger before Palmer's warm but powerfully expressive vocal comes in with chiming guitar, soon joined by a deep bass, banjo and Kendl's harmonies on a song that can't really be slotted into a genre or compared to anyone else. Later in the song they exchange verses and meet on the chorus. Spring cleaning is led by banjo and guitar with Kendl on lead vocal and Palmer harmonies on a song that starts slowly but with the tension soon ratcheted up as the guitar becomes powerfully dominant and then falls back again before rising to a crescendo towards the end. Shuck it has a banjo intro with Kendl's lovely expressive vocal coming in on a song that is difficult to imagine outside of the 'front porch' context, such is its authentic old timey feel.' High lonesome' doesn't even get close to expressing the beauty of this performance. Final mention goes to Waiting for the taker with lovely 'plinking' banjos starting things off before Kendl comes in with another expressive vocal and what sounds like multi tracked harmonies on a beautifully light sounding song but one that has great depth and atmosphere despite that light feel, with the second half being made up of a tremendous instrumental.
It is virtually impossible to over emphasize the depth of passion, commitment, feeling and huge sympathy for and with the genre that this couple bring to their music. Whilst they are very much of the late 20th and early 21st century their depth of knowledge and feeling for old timey music and consequently the ability to update the genre without any loss of power or 'eeriness' is such that if there had been a 'missing link' they would be it! As with this albums 'sister' recording this is a truly great album that is hugely entertaining as well as being both deep and expansive.