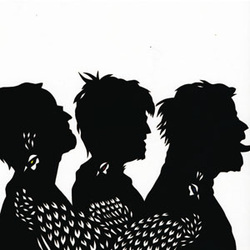 As with their 2009 debut album ‘Deathbed Pillowtalk’ you can’t help but feel that a single disc is never going to be enough to cover the scope and huge talents of the three multi instrumentalist singer/songwriters that make up this band. They are not related through blood but are inarguably related when it comes to their music. Their names are Jesse Matas, Darwin Baker and Matt Foster and the instruments they rotate amongst themselves are  banjo, mandolin, dobro, guitar, harmonica and steel guitar, plus of course, their incredibly diverse vocal styles! It’s not only the vocals that are diverse either. The musical styles they cover range from a Tom Waitsian melange of various percussive sounds through to what can almost be termed ‘straight country’ on into folk, alternative country, country rock and blues! Many albums with this diversity come across as directionless but not so the Crooked Brothers music, indeed, my only criticism of this album is that it is not long enough!

All are excellent songwriters, with their lyrical styles ranging from stories that are difficult, but rewarding, to fathom to an almost ‘standard’ easy to follow style but always with a strong poeticism. The writing and lead vocals are fairly evenly shared without ever being too pedantic about the split. Matt probably takes slightly more of a lead on the vocals simply because of his command of styles! Quite how he manages to switch from his best Waitsian vocals on 17 horses to an almost country crooner sound on Kansas is one of the unfathomables of this album. There are more Waitsian vocals on Your love is a ghost town on which even the instrumentation smack of Waits, but with the addition  of some beautifully played, haunting dobro.

The vocals generally are so varied that it is difficult at times to work out who is singing what on some of these often strange spooky songs and yet that is one of the strengths of this album, whereby the vocalist and instrumentation are selected to allow the songs to dominate rather than the musicians. It seems to be something that these three talented musicians bring naturally to the album, even on the (nearly!) straight country songs. Bluebird is a dark song with a strange atmosphere, enhanced by the slight discord of Matt and Jesse’s duet vocals. Behind these vocals is a pleasantly loping strummed guitar but as the song ambles along on it’s way there are sudden bluesy harmonica breaks to move the song out of it’s comfortable meandering!  A song such as Working for the government probably sums up the album as well as most with it’s easy going style hiding a scary tale of a man trapped in a life that he really doesn’t want but is forced into because of circumstances. In fact, many of the songs are not quite they appear to be on the surface with much of the pleasantness hiding harshness and vice versa. Winters come is a terrific country song with gorgeous dobro and fiddle that is reminiscent of the slower tempo but highest quality country rock of the early 1970s, whilst Another Sun is as good a piece of harmonica driven soulful bluesiness as you could wish to hear.

It really is a classic case of one of those albums where you just cannot tell what is around the next corner and really is a recording that repays repeated listens more than just about any other album that I have heard for many years. If you have a love of high quality well thought out, played and sung roots music without being assaulted by hard rocking guitars this really is an album for you. In fact it could be THE album for you, it certainly is for me!