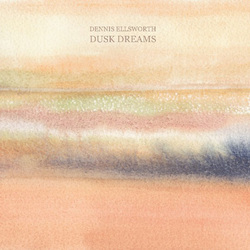 
If ever an album could prove that you cannot write anything off after just a few listens it has to be, for me anyway, this very good album by Canadian singer songwriter Dennis Ellsworth. Certainly his vocals are as good as anyones and better than most, the songs are beautifully written vignettes of observations of life and love and the  instrumentation and playing are pretty exceptional. So why didn’t I like it at first? I’m tempted to say I haven’t a clue, but the truth is that I found it lacking in any real change of pace with too many of the songs not having any oomph! It’s only with repeated listens that I’ve gradually realized some of the melodies and his vocal sound have gradually inveigled themselves into my consciousness to such a degree that I keep playing the album, looking for more and more of it’s character to reveal itself, something it keeps doing! Who needs oomph anyway?!
I listened to the album a few times in the week before the Maverick Festival and didn’t really get it, but at the
festival a couple of friends suggested I should see him live and re-evaluate. I decided to do so and was absolutely knocked out by his performance, after which the album took on a new life! I’m not suggesting you need to see him live before listening to this album but if you get the chance to see him, take it. You won’t be sorry.
He has previously released two albums with the excellent Haunted Hearts, with this being his third solo recording. The band on this recording consists of Dennis Ellsworth on vocals and guitar, David Barbe, bass, organ, percussion, electric guitar and backing vocals, Thayer Sarrano, piano, organ and backing vocals, Matt Stoessel, pedal steel and electric guitar, Seth Hendershot, drums and percussion, with the addition of Mark Geddes, who plays banjo on a couple of songs. All songs are written by Dennis except for Apple Of My Eye and Perfect Storm that are co-writes with Mark Geddes and John Smith respectively. Each of the compositions is very much melody driven and paints evocative pictures, all beautifully sung in Dennis’s warm expressive vocal style, with the generally sparse instrumentation being beautifully played. There is  a timeless quality to the whole of this lovely album that has the musical balance and quality to promote the songs rather than exhibit any histrionics.
It is very much a songwriters album with it’s generically ambiguous songs that give a nod to so many different styles but always with a lovely smooth texture that  on occasions veils the depth of some of these excellent reflections. It is probably that impossible to pigeon hole ambiguity that put me off at first when in actual fact Dennis should be applauded for not kow-towing to any particular genre, just simply writing and playing songs that he felt, without any attempt to stylize his music. Whilst much of the subject matter has it’s basic foundations in life and love his tremendously lyrical approach makes it relatively easy to work out what he is getting at but at the same time the lyrics require studying to allow the listener to even get close to understanding the full picture.  There is a strong individuality and no small amount of originality in how he structures the songs that makes it difficult to summarise many of them. Each verse paints it’s own picure that compliments the next, some dark, some more  optimistic, but all descriptive and many lending themselves to various interpretations that often on the face of it are at odds with it’s predecessor or what is to follow. In many ways the lyrics are a complete contrast to the mellow music and his vocal style and it is this that after repeated plays ensures the listener knows this man is a special talent.
The highlights are pretty much every song on the album, with the opening song, Clear Your Mind, setting the scene for what follows with it’s nice clear, easy going sound that includes gorgeous steel and acoustic guitars, drums and bass guitar with excellent harmonies and a nice catchy melody on an often dark partial allusion to the confusion of the world we live in today! Perfect Storm is a slow moody country ballad with haunting steel and very good harmonies on a song that compares the ups and downs of relationships to the weather. A very good analogy when you think about it!
If your musical preference is for mellow sounds and songs that are hugely  descriptive, driven by an
instrumentation that allows the songs to breathe, allied to warm expressive vocals you will certainly not hear a better album than this one this year. You will find a depth that repays your concentration.