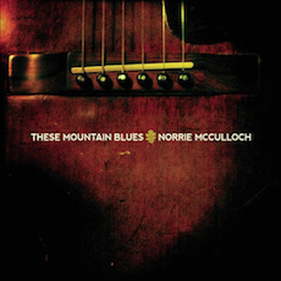 'These Mountain Blues' is the second full length recording by talented Scottish singer songwriter Norrie McCulloch, the follow up to 2014s excellent debut 'Old Lovers Junkyard' a recording that whilst I was not in a position to review, was hugely impressive none the less. He is definitely an artist who is true to his roots whilst at the same time exhibiting his wide ranging generic influences. What I mean by that is that he doesn't try to lose his strong Scottish accent that works so well with the powerful blend of folk, blues and country, equating to a song style that can't really be slotted with any degree of comfort into any particular stylistic category and is just as difficult to compare to anyone else, giving his music a welcome touch of originality
All ten of these beautifully written Norrie originals have a strong bluesy element but with the addition of an often easy going folk and country feel that varies from song to song, not only giving his music originality but also a wide diversity. One of his influences was the late great Townes Van Zandt, an artist whose grave Norrie visited on a U.S road trip between Austin and Nashville during which he wrote many of the songs on this album including the title track.
The lineup on this recording is Norrie McCulloch on guitar, vocals and harmonica, Dave McGowan plays upright bass, pedal steel and piano, with Stuart Kidd on drums and vocals and Marco Rea, piano, bass and vocals. Norrie is the possessor of an often warm, strong and expressive vocal style that is capable of tenderness where necessary and a powerful raw element on the darker tales, both of which work beautifully with the appealing melodicism in his songs.
There is a nice folksy bluesy acoustic guitar opening Calico Days, joined by Norrie's warm expressive vocal, with occasional piano supported by percussion and bass on an excellent song with a strong catchy melody. Black Dust is another excellent song, this one emphasizing the similarities between blues and Celtic folk with Norrie's Scottish accent to the fore on this intense acoustic guitar led song that could as easily be slotted into one of the 'country' offshoots! New Joke has a powerful country feel with the beautiful weeping steel guitar plus piano, percussion and bass on a gorgeous country love ballad. Final mention goes to When She Is Crying Too a slow moody song, another that includes weeping steel guitar, with the full sound of a piano, powerful bass and percussion on a sad weepy ballad that has a classic country purity, in many ways emphasized by his vocal accent.
As I have already said this man is a musician who is virtually impossible to slot into any firmly defined genre, which when you think about it is exactly how it should be. Artists should absorb and use their influences to develop their music but, importantly, should remain true to who they are rather than using any contrivances to disguise themselves or where their own roots sprang from. As one of his songs says It's hard to be the man that you are not, although how he could possibly know this is open to conjecture. On this strong recording there is no hint of trying to be what he is not, he is most definitely his own man and roots music is the better for that!