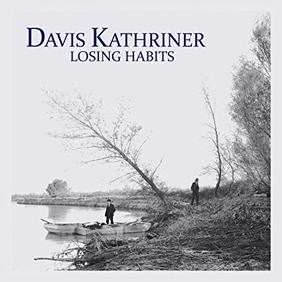 I nearly missed this excellent album. It was only when I saw that Laura Cantrell contributed vocals to one of the songs that I started to get interested. When I actually played the whole album for the first time I was mightily impressed by everything about this quite gentle and difficult to label album, although for the sake of argument let's call it 'country rock!' The reason for that will soon become obvious. Because I liked it I decided to investigate David Kathriner only to find it was not David but Davis and was intrigued to discover that the two names were surnames, names that in my usual befuddled state rung vague bells. It didn't take long after that for me to realize the two are Ben Davis and Danny Kathriner of the now long gone and much missed by me, country rock band 'Wagon.' They made three tremendous albums in the mid to late 1990s, that are, probably thanks to the digital age we now live in, still available in some form. I thought when I got a few tracks into the first listen that I recognized the vocals or they reminded me of someone but had very little hope of ever working out whom. It's a huge relief to now know!
All of the songs on this tremendous twelve song collection were written by Ben Davis and Danny Kathriner with one exception, that being Breakfast Table which was written by Ben Davis, Laura Cantrell and Danny Kathriner. The recording was carried out at Shangri-La Studios in Lexington, Kentucky and at Amano Recordings in Brooklyn, New York with Ben Davis being credited as producer and what a fine job he made of this beautifully recorded disc. Engineer Duane Lundy assembled a fine team of musicians which included Laura Cantrell's beautiful vocals on the song she wrote with the duo. Danny Kathriner was lead vocalist on most of the songs as well as playing drums, with Ben Davis on acoustic and electric guitars, as well as, (as he put it) 'odds and ends.' Lauren Balthrop provides stunning lead vocals on Same For You as well as providing harmony vocals throughout, whilst Laura Cantrell takes lead vocals on the already mentioned Breakfast Table. Whilst the list of supporting musicians is lengthy, all of these fairly gentle, if often dramatic and moody songs have a sparseness that allows the lyrics and indeed the emotional  vocals to shine through without ever being drowned out by the instrumentation. J. Tom Hnatow provided acoustic and electric guitar as well as pedal steel, Lee Carroll, piano, Wurlitzer and Hammond, Blake Cox, electric bass, Dred Scott played piano, Tony Scherr was on acoustic and electric bass, as well as acoustic and electric guitars, with Erik Friedlander providing cello arrangement and performance on Losing Habits, with Steve Rauner on electric guitar and lap steel on Gone. Quite a collection of talents and instruments but all essential in getting the best out of these already excellent songs.
The album opener and title track, Losing habits, gets under way with a gentle acoustic guitar intro accompanied by a restrained violin in the background before the bass, piano and lead and harmony vocals come in on a slow ballad, but one that has a depth that many lack. There are some nice tempo changes that bring a little diversity to the song despite always being slow and moody and the melody is excellent, whilst the instrumentation is always sparse allowing the song to have a nice reflective feel. Love you worse is driven by a heavy bass and piano with a solid shuffling percussion on a song that tempo wise is just a notch above its predecessor but has a heavier feel thanks to the arrangement. Danny Kathriners vocal is excellent and the gorgeous harmonies from Lauren Balthrop add texture and colour and lift the song above the merely reflective, adding a little 'spice.' On the gorgeous Breakfast table a gentle acoustic guitar leads Laura Cantrell's beautiful vocal in on another excellent song, soon joined by a beautiful melodic guitar, with steel guitar adding a powerful country edge. Eventually the percussion comes in and solidifies the sound leading to Danny's counter vocal on this beautiful, perfectly formed and performed ballad. Finally, on Same for you there is a melodic guitar intro with percussion and throbbing bass leading to Lauren Balthrops beautifully expressive vocal on a lovely moody ballad that really highlights Laurens vocal prowess. The instrumentation gradually solidifies as the depth of sound increases and the steel guitar emphasizes the country elements on a song that whilst not the strongest on the album is so well arranged and performed that it sometimes seems to be.
Whilst different to the recordings the duo made twenty years ago as 'Wagon' I think that any old fans out there will love this recording. Danny Kathriner's evocative vocals are as recognizable as ever, as is the writing quality and it wouldn't surprise me in the slightest if they achieve even more of a fan base, more than justifying their return to making music. Let's just hope there is more to follow and that this is not just a final effort to prove to themselves that they can still do it, although this album certainly confirms the fact that they can!