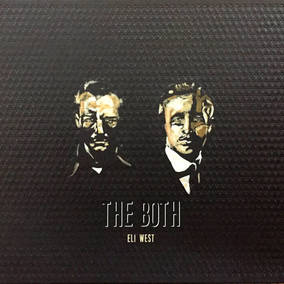 Strange album this. Twelve tracks but only six titles. The reason? Tracks one to six all include vocals whilst seven to twelve are instrumental versions of those first six. On the face of it, not a very good idea but don't decide too soon, because I wasn't keen at first, despite the virtuosic playing and excellence of the vocals. Now I keep returning to the album and trying to find the contrasts between the versions that enhance the depth and power of the album, something that might be relatively easy for musicians but when you have a zero rated musical talent, a can of worms!
I've been a fan of Eli West for a few years now, having seen him and musical partner Cahalen Morrison play live a couple of times and always enjoyed their quite original and haunting take on various aspects of 'old timey' music, albeit with a contemporary folk flavour. I know that Cahalen has made recordings on which Eli was not with him and wondered how long it would be before we could expect a solo album from Eli, feeling he had more than enough talent to do so. I need wonder no longer with the release of this excellent album that doesn't actually stretch any boundaries but is none the less an excellent addition to the ever expanding field that includes modern old timey, folk and varying degrees of rural bluesiness, in fact 'rural roots music' is probably an appropriate description with its lack of boundaries and definition!
Don't run away with the idea that he had only worked previously with Cahalen Morrison either, being a much sought after sidesman to artists as talented as Tim O’Brien, Jayme Stone, John Reischman, Tony Furtado and many more, although this is his first time as leader. More proof of the high esteem in which he is held is provided by the list of people who have helped out on this album. He has artists of the calibre of jazz great Bill Frissell on electric guitar, Dori Freeman on guitar and vocals, Elizabeth Laprelle (Anna & Elizabeth) on vocals, John Reischmann, mandolin, Christian Sedelmeyer, (10 String Symphony) fiddle, Ethan Jodziewicz (Sierra Hull) on bass and Anna Roberts Gevault on fiddle and vocals. Eli has a lovely warm vocal style that should appeal to just about everyone and is a genuine multi instrumentalist, on this album alone playing electric guitar, banjo, pedal steel, acoustic guitar and tenor guitar.
The albums theme is built on the contrasts between Eli's two grandfathers and he has manipulated six old American folk songs to describe the duality between two members of the same family and all that entails. The intention was not to supplement the first six vocal tracks with a few instrumentals to fill out the recording but to develop the original stories and in many ways further empower the songs by rubber stamping the stories with a lack of words, something that will be obvious on first listen to this excellent and, in view of the talents on show, virtuosic recording. There is a great subtlety and a deep thoughtfulness inherent in every one of these twelve tracks on this unusual recording, one that seems to take on more power with every play, having a simplicity in its makeup that is anything but simple!
Give me your love and i'll give you mine is the first song on the album and one that is beautiful yet sparse with a lovely flowing melodic electric guitar supporting the gorgeous duet vocals that comprise Eli and Dori, a match quite possibly made in heavan! Lonesome Valley is a classic song and a classic duet by Eli and Dori with just a haunting banjo and body percussion for support, giving the song the both haunting and haunted atmosphere that was certainly intended by its writer long ago. The Lone Pilgrim is another beauty of a duet but a change in partner for Eli this time. Anna Roberts Gevault adds her lovely vocals that again, blend so well with Eli's, with the pair supported by just the banjo but such is the quality of the vocals any further colouring would be superfluous. On the instrumental songs there are no histrionics but plenty of virtuosic playing as you can expect from a lineup of such talents and the tempos and atmosphere in many ways echo those of the vocal tracks and yet you never get the feeling you only recently heard them.
This has gone from being an album that I only gave a cursory listen to first time, then with subsequent listens I gradually became hooked, not just by the quality of the playing and singing but also by the different textures and the album's, albeit loose, 'concept.' Equally, I was struck by the fact that these old songs are not only far from extinct but actually still have a lot to say. I don't think many people could have made this album, so Eli and friends deserve huge credit for not only trying but succeeding in releasing a recording that is pretty much unique and breathes new life into old songs.