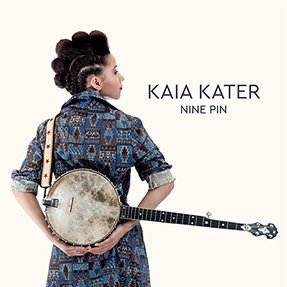 Born and raised in Quebec and now splitting her time between Toronto and Elkins, West Virginia where she studies traditional music and dance Kaia Kater fairly obviously has an enviable depth of feeling and talent for all things Appalachian and 'old timey.' That combination not only allows her to bring a huge depth of believability to her music that is rooted in the 1920s and before, but also an originality that never loses sight of its deep tap root.
Whilst her first full album, 'Sorrow Bound,'which was given a rave review on this site, was an incredible recording, 'Nine Pin' actually has a more confident and perhaps a more experimental, feel. It was produced by Kaia and Chris Bartos and quite incredibly, all fifteen songs were recorded in just one day, blending her own writing with old traditional songs in such a way that separating the two is next to impossible
She can't be compared to anyone else thanks to her completely unique take on an  updating of various old musical strains from jazz to blues to old timey but all carried out in a totally original original way. To say she is pushing the boundaries is an understatement of epic proportions. There are elements of these songs that are recognizable but she has not just developed gradually from her tremendous debut album but taken a mighty leap forward into virtually unknown musical territory. Some may say she has chosen to take too big a leap but she should be applauded for her extraordinary ideas and keeping her nerve in perhaps pushing these old musical strains at least as far as they have ever been pushed and leading the way for others to follow her incredible experimental path
Whilst rooted in old time music her songs subject matter includes many contemporary issues, mainly problems, but put in a way that is often thought provoking, proving that at just 22 years of age she has a highly developed communication ability. Whilst the subject matter is not necessarily joyous it is certainly believable and deals with many of the issues of a multi cultural society and our ever shrinking planet. Overall there is a warmth to the recording that at the same time often creates a slightly unsettling atmosphere, as much due to the often experimental nature of the instrumentation and unusual melodies as much as the lyrical content, all making it an easy album to lose yourself in but certainly not 'easy listening!' There is often an ethereal quality but without any of the 'floatiness' that word conjures up. It's often a question of little snippets of random thoughts that have produced a song or even a brief instrumental interlude that has a message or a story to tell before drifting off into the ether again.
The first of the fifteen songs on the album is Saint Elizabeth, with its nice banjo start that is soon joined by Kaia's evocative vocal on an unusually structured song. In some ways it is reminiscent of a more rootsy Joni Mitchell. There is a powerful bass tone and excellent harmonies on a song that has a strong element of freeform jazziness with trumpet joining in later on as the song builds to a gradual muted crescendo! It's followed by a strong vocal from Kaia on Little Pink supported by her usual banjo expertise, with added percussion, nice powerful bass and restrained fiddle on a song that has much of the feel (and a similar melody) of 'The Cuckoo.' On Rising down there is just a banjo backing initially for  Kaia's haunted vocal before being joined by brass which gives the song an even more haunted atmosphere eventually joined by strings on another hugely unusual song. There is a lovely banjo and moog supporting Kaia's edgy vocal on the excellent if slightly unsettling title song Nine Pin. She is soon joined by fiddle on a song that is a slow burner as it builds a little intensity with gorgeous harmonies and a baritone guitar adding a lovely melodic feel. On White it is back to the banjo lead with thrumming bass and a lovely vocal that conjures up a 'high lonesome' Appalachian feel. The haunting trumpet sound in the background takes it out of the Appalachian setting but the 'shape singers' take it straight back in! It is that sort of an album that in some ways is defined by this song. It is a recording that has many contrasting elements, all of which are blended beautifully and work incredibly well. Finally, Harvest and the plough is a song that has an old time 'front porch' feel with just banjo and Kaia's vocal. Eventually the instrumentation solidifies with violin, bass and trumpet, all restrained but there none the less, even including a brief glimpse of the piano. The final track on this extraordinary album is Hangman's reel, as its title suggests, an instrumental, with fiddle and banjo giving it an almost 'contemporary hillbilly' feel!
Quite how Kaia Kater can follow this incredible recording remains to be seen (or heard) but on these first two albums and one e.p alone she has proved her talent has no real limits, likewise her experimental proclivities and abilities. I just hope the listening public can keep up with her. I'm certainly going to have a damn good try!