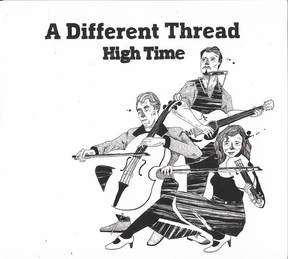 I nearly didn't review this e.p. I try, with very limited success; to avoid reviewing any e.p's but when I read the accompanying email several references pricked my curiosity, so here we are! Those references were 'Appalachia,' 'North Yorkshire Moors,' Lichfield, Staffordshire and 'British Americana,' not necessarily words you would normally expect to find in the same paragraph!
To illuminate the reader a little, this talented trio consists of Robert Jackson who was raised in the midlands, UK, plays guitar, vocals and banjo; Isaac Collier hails from the North Yorkshire Moors and plays cello, with Alicia Best from Appalachia, on fiddle, vocals and suitcase drum-kit. The Lichfield, Staffordshire 'link?' That is where they are currently based.        The reference to their sound as 'British Americana' is a description the trio have themselves given the music they make and to be honest there can be few bands that have been 'blessed' with a more accurate label thanks to the blend of British and American folk influences that are contained in these five excellent songs. They are all held together by a sometimes vague but always there veneer of bluesiness that, all things considered, makes this trio impossible to compare to anyone else that I can think of and has me really wishing this was a 'full album.' High Time is their second e.p and follows 'Home from home which was released earlier this year, a recording that I'm very soon going to try to get a copy of.
The songs were all written by Robert Jackson with some input from Alicia on the excellent Cherry tree, whilst Isaac arranged all of his cello parts, an instrument that brings a natural mournfulness to these beautifully conceived songs. There can't be many trio's who are better matched than 'A Different Thread' with the three musicians all bringing great expertise from their varied musical and geographical fields ensuring these songs are not just stylistic contrivances but have a believability and depth that harks back to the early, eerie days of recording and those now long gone days of magic and mystery that was so bound up in English folk music.
The above mentioned Cherry tree is a quite stunning song with the banjo, the mournful cello, guitar, fiddle and percussion underpinning this haunting folksy tale that genuinely has an 'ear worm' melody. Roberts lead vocal is warm and evocative and the backing vocals have a strange otherworldliness that when combined with everything else makes this song a real musical highlight.  It could well have been my favourite on the disc were it not for the tremendous Sweet Elizabeth which contains a consistent and unerring sense of drama that is part British folk and part American 'old timey' with Robert Jackson's beautifully evocative vocal being perfectly supported by the acoustic guitar, fiddle and cello. Overall, 'High Time' is a disc that I've happily had on repeat play and will leave all those who hear it slavering over the desire for a follow up, as I am.
We still have a longish wait for that 'follow up' but there is talk of a couple of newly recorded tracks that may get released and next spring the trio is hoping to record an album in Alicia's home state of North Carolina, with a mix of songs written by both Alicia and Robert. I for one can't wait to hear it and I'm pretty sure that if you get a copy of this e.p you will feel the same.