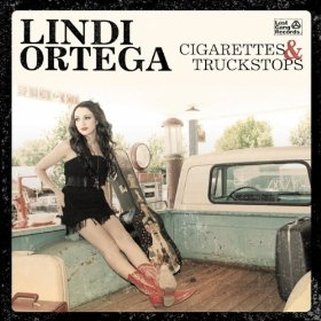 When talking with people about my love for ‘country music’ I always rush to qualify the term by saying that it’s the edgy side of country that I’m talking about and doesn’t generally include the version that seems to be commonly accepted such as the sequin gowned women with full orchestras behind them or the majority of the male ‘hat acts,’ along with the highly polished/sanitized production, in fact most ‘commercial’ country music! (Generally it’s only commercial because of hugely expensive promotion by
the big record companies anyway!) The fear is that artists such as Lindi Ortega are going to get lumped in with these simply because of her highly marketable striking looks and the fact that she is often talked about as a ‘country’ artist
rather than ‘alt. country.’ Should that fear come to fruition it would be a great shame because there is far more to this highly talented singer songwriters music than there is to the over produced ‘country pop’ churned out by much of the music industry, something that is fairly obvious from the very first play of this beautiful recording. She has been described as a blend of Dolly Parton, Johnny Cash and Emmylou! I can see what is meant by those comparisons but it is much too restrictive. To those greats you need to add the attitude of artists such as Rosie Flores or Wanda Jackson and latterly Rachel Brooke. In other words she is an individual with enormous talent who will settle for nothing less than ploughing her own musical furrow. Her beautiful feminine vocals are full of character, edginess, power and a gorgeous melodicism; in a nutshell just about perfect for what she is trying to achieve. She is as capable of rocking out with the best as she is of the most tender ballad but all is done with her quite individual sense of style.
Much of this album has echoes of some of the early pioneering ‘country and western’ music of the 1930s through to the 1950s, thematically as well as musically, despite being very much a modern take on this versatile genre. It is atmospherically very dense with very little optimism in her songs, that tell of lost love, lost hope and a general acceptance that when all else fails all you can do is fight back. Her sharply intense vocals whilst being incredibly feminine have so much character that there are no limitations in tempo or subject matter of what she can sing and there is a distinct lack of sugariness, in fact despite those lovely vocals there is an incredibly dark atmosphere.
Much of that atmosphere is thanks to Colin Linden’s sympathetic production as well as  Lindi’s clear vocals and diction that make reading the lyrics unnecessary. The album opener is also the title track, Cigarettes And Truckstops, a gorgeous, haunting country ballad that despite it’s loving theme never descends into sugariness, on a tale of reminiscences about a lost love and the desire to see him ‘one more time.’ This is followed by The Day You Die, an excellent mid tempo song that has a strong country/rockabilly edge thanks to her vocals and the thumping bass and twangy electric guitar, again about a love that if it’s not lost isn’t far from it. Murder Of Crows is a real beauty with it’s lovely dobro introduction on a mid tempo hauntingly sinister tale made more so by her powerful, fiery vocals which add to the eerieness of a story on which a murdered ex lovers body is buried in the back yard, conveniently followed by Heavan Has No Vacancy, on which she gets her punishment, without any sign of redemption! It opens with a preachers rhetoric and sparse dobro before Lindi’s gorgeous vocal comes in on a hauntingly sad tale that despite her pleas is summed up by the title. Final mention goes to Use Me with
it’s gorgeous haunting steel guitar on an evocatively intense tale of self sacrifice that kicks against a drug culture that is absorbing a lover into it, a song that as with many others on this tremendous album pulls no punches
whatsoever.
Despite the comparisons made earlier, repeated listening sessions seem to emphasise the Rachel Brooke comparison a little more than the others. Not so much in terms of the style but more by the strong individuality that sets out a path that is going to be difficult to follow, much less stay on. But, we have to hope artists as talented as Lindi continue to follow their muse and hopefully get the success their talent really should entitle them to but often doesn’t deliver. Terrific album!