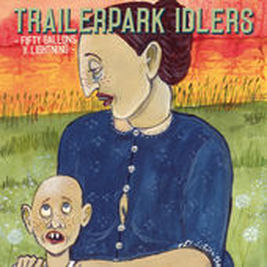 To call this band prolific is an understatement of mammoth proportions! This is their eleventh full length recording since 2007, with three being released in 2010 alone and whilst writing this they are working on their twelfth. I just hope I can get this review finished before the next one comes out! Surely the creativity must have died out by now, but no, it most definitely has not. Whilst I haven’t heard all of their albums, the couple of others I have heard are superb, although with this current offering on constant rotation I would say this is their best so far.

This is genuinely dark gothic country that has a strange eerilly pervading atmosphere on virtually every track. Their vocal accents are fairly obviously not American but fortunately they don’t try to disguise the fact that English is not their first language, although it is very good. They are actually from Norrkoping/Soderkoping, Sweden and were formed in 2006 by Morgan Hellman and JK Anderson with Magnus Larsson and Gunnar Nilsson, both of the latter two eventually leaving the band, with Ben Dee joining in 2007 and Miss LisaLee in 2008. Their current lineup consists of Miss LisaLee on vocals and guitar, Morgan Hellman, vocals, electric and acous􀆟c rhythm guitar, bo􀆩leneck guitar and percussion, Ben Dee Salmenranta, electric, acous􀆟c and highstring lead guitar and bo􀆩leneck guitar, JK Anderson plays doghouse bass and Gustav Berry on fiddle. All of the songwriting is credited to Elizabeth and Morgan Hellman with some being solo efforts and several co-written, and an excellent bunch of songs they are too!

The album slots easily into the ‘gothic country’ genre although they never limit themselves by trying to stay totally within those confines. There is tremendous variety in tempos, themes and even seemingly the instrumentation. I say seemingly because the subtle changes and various pairings of the stringed instruments helps ensure a powerful diversity to these thirteen songs, with no two songs sounding anything like each other, other than that strong ‘gothic’ link. At times Miss LisaLee’s vocal reminds me of edgy artists such as Holly Golightly or perhaps even the vocally untutored women of the 1920s who were in themselves innovators, in fact this bands whole attitude has a powerful lack of any distinct formula other than that exhibited by their obvious love of country music that steers well clear of the mainstream. They name some of their influences as artists such as Hank Williams, Chuck Berry, Gillian Welch, Bob Wills, Ramones, Johnny Cash, Nick Cave, Merle Haggard, Loretta Lynn, Jimmie Rodgers, Rolling Stones and Ernest Tubb amongst others, in fact if you loaded that crew into the melting pot the Trailerpark Idlers, in all probability, would be the result!

Whilst gothic country is at the root of their music Trailerpark Idlers sometimes explore beyond it’s boundaries to ensure that diversity and varied tempos is the overriding  impression that is created although that darkness is never too far away. Moonshine Man includes excellent upbeat acoustic guitars and an up tempo feel with an atmospheric male lead vocal and spooky female harmonies on the tale of a moonshiner but one that brings a new feeling to the ‘genre.’ Where Did You Go Mary Anne? is classic dark gothic country with excellent  instrumentation, a deep dark male lead vocal and gorgeous haunting harmonies with dobro and hugely atmospheric fiddle. Sing With The Bird, Talk To The Cat has a sweet feminine lead vocal and otherworldy harmonies that give the song an even more eerie atmosphere. The instrumentation includes nice acoustic guitar and banjo on a song on which the beauty of that female lead and the exquisite harmonies emphasizes the spookiness that gorgeous harmonies can occasionally evoke. God Damn You is led by a lovely dobro sound on a self explanatory tale, with the lovely female vocal further lifted by the melancholic harmonies  and an instrumentation that is just about perfect for purpose! Get Down On Your Knees Sinner is another extraordinarilly catchy tale with a terrific sound and male harmonies keeping this one edgy with a chiming electric guitar and accordion sometimes getting involved. Finally, Willy Went Wild is driven by terrific chugging electric guitars with a male lead vocal and female harmonies on a sinister country/murder ballad that has a real threatening edginess.

This is a tremendous album of ‘gothic’ country music that for most of it’s length is cloaked in darkness, but it is a darkness in which you can feel the depth of these songs and their excellent arrangements, all carried out by a band for whom English is their second language. Maybe it’s that which helps give this recording much of it’s otherworldly atmosphere, the immigrants of old having arrived on the continent with accents that helped develop the American language. A terrific album that really makes me want to explore more of this tremendous bands back catalogue. Give it a listen and you will probably feel the same.