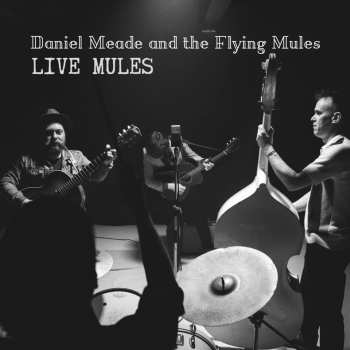 Four of Daniel Meade's albums, both solo and with the Flying Mules, have been reviewed on this website so I am pretty obviously a fan. The first time I saw him and the band live was in a pub, I believe on a Saturday afternoon, at the Kilkenny music festival several years ago. Not really an ideal setting for someone who has been used to outdoor music festivals or evening pub gigs, but having been a fan of his recordings for some time prior to that I was absolutely knocked out by how good this tightest of bands were live and the warmth of the musical atmosphere they created. This tremendous disc merely serves to confirm that opinion.
Nine of the ten songs were penned by Daniel with four taken from the 2016 album 'Let me off at the bottom', three from 2015s 'Keep right away', one from the 2014 album 'As good as bad can be' and one that was penned by the great Sonny Terry and Brownie McGhee combination. This talented band consists of Daniel, who plays guitar and vocals; Lloyd Reid on lead guitar, Mark Berrie plays double bass and Thomas Sutherland is on drums. The latter pair lay down an incredibly solid foundation of bass and percussion although  one that whilst visibly propulsive is never over dominant, always being there to set the tempo and allow Daniel and the incredible guitar playing of Lloyd Reid to go where they wish with the vocals and the melodies. Justifiably Lloyd's guitar is the instrument that is most to the fore (apart from the vocals!), providing the lovely melodicism that often has an improvised, almost jazzy feel and creates such a warm dynamic on this easy rolling, despite the varied tempos, excellent live set that was recorded in Shetland in 2016.
Daniel is one of the best songwriters around, producing beautifully descriptive and often true stories, whilst being blessed with a voice that is warm and easy to listen to, making the job of picking up the lyrics easy; and what lyrics and ear worm melodies they are, making the picking of highlights from this excellent concert almost impossible. The bands performance of all of these songs is as good, or better, than anyone could wish to hear, although suffice to say I'm always happy to hear Rising river blues, There's a headstone where her heart used to be, Let me off at the bottom and Please Louise, although it shouldn't be taken that they are the only highlights on this ten song live recording of such uniform quality.
I even understand there may well be another couple of albums this year; something for all 'roots' fans to look forward to. You can treat this excellent live recording not only as an excellent live concert, and a hugely pleasurable listening experience, in its own right but also as an example of Daniel and the Flying Mules peerless musical talents. If you get the chance to see Daniel and band live, take it! I guarantee that you won't be disappointed, and you should also investigate their tremendous back catalogue. The first time I heard a recording of Daniels I actually thought he was one of the 'edgy' American singer songwriters rooted in 'old country music' that I love so much. I can't really think of a greater compliment than that!