FOGHORN LEGHORN – NOT BEFORE TIME 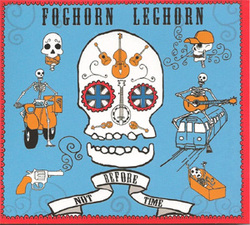 
If ever an album could be labeled as ‘genuine good time folk music with an old time hillbilly feel’ it is most definitely this excellent recording by Foghorn Leghorn. It probably fits  nicely into a loose genre that includes dashes of  folk, bluegrass, country, old timey, hillbilly, as well as a few other indeterminate strains but with a tremendous good time feel that ensures the listener, no matter how determined, could never feel low whilst listening to this hugely entertaining album. They are often referred to as a bluegrass band but they have more of an
old timey feel and any firm label does this talented band a disservice, with them certainly not relying on just high lonesome vocals or bluegrass disciplines. In many ways there is an appealing ramshackleness that has the listener wondering what will come next.
The songs are all good and whilst other bands play a similar (but not exactly the same) brand of music, this band stands out in part due to their exuberance and obvious pleasure in their music but also because of their terrific musical prowess, something that bands who (apparently!) don’t take themselves too seriously are rarely credited with. The band consists of Tim Kent on vocals and banjo,Eamon Flynn, vocals and mandolin, Del Brookes, acoustic guitar, Paul Fay, vocals, fiddle and harmonica, Kevin O’ Neill, vocals, dobro and acoustic guitar and Chris Clarke, vocals, double bass and acoustic guitar. Eamon Flynn wrote five of the songs plus a co-write with Andy Dore and the remainder are pretty much shared between the other band members although O’ Neill wrote two, including the excellent bluegrass gospel song My Lord. Thanks to the variety of songwriters within the band there is great stylistic, as well as vocal diversity and yet the album never has a disjointed feel, thanks mainly to the always excellent instrumentation and playing that gives the album it’s solid foundation.
The album kicks off as it means to carry on, that is to say with good time, uplifting music, played and sung with skill, fire and enthusiasm, in the form of Pizza Boy an excellent song with a varied tempo  driven by banjo,
male vocals, dobro and excellent harmonies. This is followed by Tube Trains a song that could easily be centred around their London base but with the vocals, fiddle, dobro and banjo giving a strong ‘hillbilly’feel. Next up is
Runner Up a song that has a strong country feel, although the atmosphere created is in many ways, of indeterminate date. It seems to evoke a time that followed the old hillbillies but predates modern country, having a nice edginess that is driven by mandolin, fiddle, dobro, bass and banjo and an often early country rock feel. It is terrific songs such as this that helps give the band their individuality, generically ‘country’ but but with influences that come from all points of the roots music compass! There is a tremendous instrumental in Petersburg Gal, a tune that really shows up their musical skills, followed by My Lord, a terrific country gospel song with really good lead and harmony vocals and excellent instrumentation. Smoking Gun is a terrific, if gorey, murder ballad with the vocal and instrumentation balance allied to the tempo being perfect for a song such as this. Not humourous, but as with much of this excellent album, with an undercurrent of humour that keeps the entertainment high and the dark element under control. The album closer is the terrific almost anthemic slow chugging Brother O Brother,  with the usual excellent instrumentation, dominant banjo, atmospheric vocals and some of the best harmonies on the album. A fitting closer to a hugely entertaining album.
It never ceases to amaze me just how many British bands have the ability to not only play American roots
music but to actually have as much of a feel for it as those in the U.S. I know and have often used the argument that much of the music has it’s roots in Europe but the fact remains that it came to fruition in 20thcentury America. This tremendous band are another great addition to that ever increasing list of bands that given a chance could attain huge credibility on the other side of the Atlantic. Roll on when we can see them on the south coast of England!

This excellent album is released in the U.K on Tuesday 27th August 2013