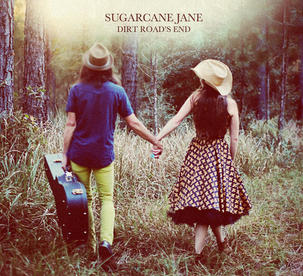 This is the fourth album by a duo who, on the strength of this and the one other album by them that I've heard, are quite literally peerless. Most of their songs are duets although Anthony Crawford's voice is usually slightly further forward than his wife Savana Lee but their vocals have the perfect balance of warmth and edginess as does the makeup of their songs.
They are unusual in as much as they both have had and to a degree still have careers independent of each other. Anthony Crawford is a multi instrumentalist, vocalist and songwriter supreme and is also a regular member of Neil Young's backing bands, with touring credits that are a veritable who's who of top roots artists. He has written over four hundred songs, many of which have been recorded by artists such as  Steve Winwood, Dwight Yoakam, Pegi Young, Kenny Rogers, Lee Greenwood, the Nitty Gritty Dirt Band, Sawyer Brown, The Oak Ridge Boys, Billy Burnett, and Lorrie Morgan. He has also had a successful solo career, during which he has made three albums, added to which he is a successful photographer and videographer! His musical partner and wife,  Savana Lee, as well as having had a solo career also co-owns Deepfield Studio and recently the duo formed Willie Sugarcapps with Will Kimbrough, Grayson Capps and Corky Hughes. So, confirmation that they lead a highly diverse musical life, something that even the casual listener will latch on to after just one listen to this excellent album.
Experience breeds confidence and this duo have the confidence and drive of a duo such as Emmylou Harris and Rodney Crowell with a vocal blend that, at least to my ears, is about as near perfect as it is possible to get. That vocal style gives them a uniqueness that really should see them have huge success, with Anthony usually to the fore and Savana never far behind on these songs that thematically are rooted in a mix of rural country and a swampy bluesiness. Probably thanks in part to the way their tremendous duet vocals work every song has an almost instantly memorable melody.
All ten of the tremendous songs are written by Anthony Crawford with six being co writes with country maverick Buzz Cason who also co produced. The album opens appropriately enough with Ballad Of Sugarcane Jane, the tremendous harmonies immediately signaling this is one of those rare albums on which the vocal harmonies have such a powerful dynamism and dramatic edge that few if any can match them. It is a tremendous mid tempo duet that follows on from a nice sparse guitar intro and includes some excellent harmonica playing. The voices blend perfectly with a dynamic slide guitar to give the song a perfect edge and with a nice electric guitar solo on this tale that is basically a biographical signature. San Andreas is a real beauty of a song telling a fascinating love story that sometimes has a 'hillbillyesque' atmosphere with the nice banjo and acoustic guitar driving a song that has a memorable melody and excellent lyrical content with the two vocalists shown at their best. Louisiana is played at a fairly high tempo with a variety of musical sounds that really evoke the swampiness of New Orleans/Louisiana music. It is a highly unusual song but one that highlights the diversity of the album. Heartbreak Road is another tremendous song that has a powerful drive with their vocal duet propelling the tale and Savana having a solo that is slightly distorted, adding even more character to a song that has the drive and impact of 'Copperhead Road!' Finally, Sugar is an up tempo rootsy rocker that rocks nicely but also has a 'hillbilly' sensibility on another tremendous duet, with a powerful melodic guitar line coursing through the song.
It is rare that a duo can have brought such a diversity of styles to their music whilst still being recognizably themselves and the only surprise about their career as a duo is that Sugarcane Jane is not yet a worldwide household name. They certainly should be. Duet albums really don't get any better than this.