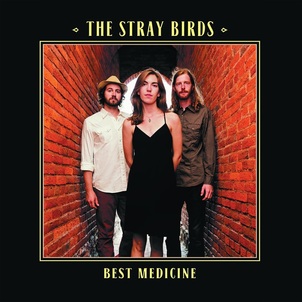 The Stray Birds –Best medicine (Yep Roc Records)
This is an album that reveals something different with every play thanks to the fact they have two talented vocalists and songwriters, one male and one female and are not afraid to put new interpretations on a couple of old songs. The trio are all virtuosic multi instrumentalists who don’t seem to have any limits to what they attempt and ultimately succeed at with their all acoustic music.
http://thestraybirds.com/


Run Boy Run – Something to someone (Sky Island Records)
This five piece band, consisting of three women and two men, play all acoustic music so skillfully and with so much passion that it makes a mockery of labels, despite which, they are very much rooted in old timey and bluegrass in fairly equal measures, but very much in their own unique style. Excellent playing and some of the most beautifully feminine vocals you will hear allied to some tremendous traditional and their own original songs and you have an album that will live long in the memory.
http://www.runboyrunband.com/


The Highballers (Woodshed Records)
A tremendous ‘country rock’ album that sometimes rocks hard, at others slows things down with some gorgeous moody ballads. They are a talented American band with vocals that veer from evocative male to a gorgeous female lead and terrific harmonies on some beautifully written songs, expert arrangements and playing, with plenty of twang!
http://www.highballersmusic.com/

Wookalily – All the waiting while (One-a-cord records)
This really is an incredible album of Americana music, so it is fitting that Wookalily are based in Northern Ireland and play an Irish folk influenced American roots music! They exhibit as much authenticity, fire and sheer exuberance as those the artists  who were around at the dawn of country recordings. These four young women could (should!) turn out to be the roots music find of the decade. Their original songs are of a tremendously high quality, the vocals blend a gorgeous femininity with an unusual edginess that few can match and their playing and arrangements almost defy superlatives!
http://wookalily.com/

Bob Collum & the Welfare Mothers – Little Rock (Harbour Song Records)
This is a terrific album of melodic ‘country rock’ underpinned by some, at times, quite harrowing stories that contrast beautifully with the warm vocals, gorgeous male/female harmonies and superb playing. In some ways the album is a throwback to the early days of country rock, at others a strong modernisation of the genre that adds an excellent post script.
http://www.bobcollum.com/

Paper Moon Shiners (Self Released)
This hugely entertaining Austin, Tx based duo, whilst not taking themselves too seriously, fairly obviously do take their music seriously, playing a pretty much unique and highly original blend of styles heard too infrequently in the 21st century. Their sparse sound mixes blues, hillbilly, vaudeville, jazz and a few others that seep into the gaps of a sound that given a chance will be recognised by many as uniquely the Paper Moon Shiners. Frank Meyer’s multi instrumental skills are there for all to hear and Elena Antionelli’s gorgeous character laden feminine vocals twist and turn through this variety of styles as if steeped in each of them, at times emulating the stylistic ‘trilling’ of many decades ago. She even makes Robert Johnson’s Come on in my kitchen her own on this recording of old songs mixed with Meyer’s excellent originals.
http://www.papermoonshiners.com/

Hat Fitz & Cara Robinson – Do Tell (Manhaton Records)
This pairing just seems to get better with every album! Fitz is a big bearded Australian bluesman with a deep dark voice and an extraordinarily dextrous guitar playing ability, whereas Cara is Irish and with a vocal range that can do gentle blues ballads or fiery blues ‘shouters’ somewhere between Bonnie Raitt and Janis Joplin. This album covers many of the various aspects of the blues without resorting to any false histrionics or polish. Blues album of the year? Could well be.
http://www.hatfitzandcara.com/

John Hammond jr – Rough & tough (Chesky) (2009)
For those unfamiliar with Johns work he genuinely is one of the greats of acoustic blues and in a long career has produced one of the most consistent back catalogues in music. His father was a producer and bluesologist who was also responsible for giving a young Bob Dylan his first record contract. John has made better albums than this but it is a fine example of his punchy acoustic blues with his virtuosic guitar and harmonica work.
http://www.johnhammond.com/

Suzanne Jarvie – Spiral road (Self Released)
This is a tremendous debut album by Suzanne, a lady who has already had a non music industry career and four children! All of these excellent songs are self penned, with several being quite cinematic in scope. The arrangements couldn’t really be better and her lovely warm vocals and indeed those arrangements have a nice edginess that keeps her clear of ‘rhinestone country.’ It is one of those albums that on first play seemed ‘really nice’ but then with more plays it revealed further depths and continues to do so, with that lovely ‘edginess,’ proving not all beautiful country music has to be bland.
http://suzannejarvie.com/

The New American Farmers – The Farmacology sessions (Big Barncat Records)
Terrific album that veers from melodic country weeper to heavy driving rock but always with their own individual melodic style. Some incredible guitar playing, tremendous arrangements and excellent vocals, with some songs being eerily haunting, sometimes sinister and others having a more straightforward guitar driven ‘rootsy rock’ sensibility. Even includes psychedelic country that sounds a little like a recording from the early 70s such as CSN & Y.
http://www.newamericanfarmers.org/

The Mulligan Brothers – Via Portland (Self Released)
Mellow of sound and powerful stories is nice and brief but added to that is tremendously warm lead vocals, extraordinary harmonies and excellent  arrangements. This four piece bands mastery of their instruments leaves little to be desired as well on these sparse songs. It is a deceptive album; on first play it struck me as mellow pop/rock, but it soon dawned that there is very much more to this excellent band and beautifully melodic album.

The Hardin Draw – Burn this town
This brilliant album blends the warm vocal style and melodicism of 1970s California country rock with the intensity and high lonesome power of the hillbillies of old added to which is  the variety and versatility of modern day alt. Country. So what is the down side? There isn’t one! I love everything about this tremendous recording. The songs are excellent as are the arrangements and playing but the icing on the cake is the warm evocative vocals, supported by excellent harmonies and the blend of electric and acoustic instruments. Credit should also be given to the Old Crow Medicine Shows Morgan Jahnig for the excellence with which he carried out production duties.
http://thehardindraw.bandcamp.com/

Distance, Light & Sky – Casting Nets
Gorgeous, melancholic album of sparse almost ambient songs by a talented trio of musicians that includes Chris Eckman of the Walkabouts. His raw vocals are a beautiful contrast with the lovely voice of Chantal Acda on this recording that flows seamlessly from start to finish.
No Website as yet so try http://chriseckman.net/

Owen Mays & the 80 Proof Boys – Hateful blues (Maybest Records)
This is a terrific album of ‘pure’ country music from a man with the vocal ability to bring a powerful edginess to his songs. The playing is excellent and the arrangements really couldn’t be bettered, being ‘traditional’ but with a modern edge that brackets him with artists such as Sturgill Simpson and Cale Tyson.
http://www.owenmays.com/