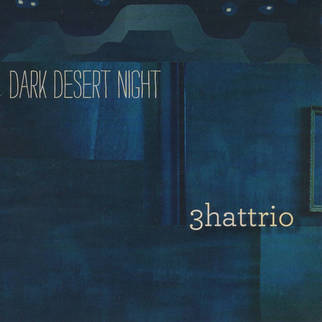 The 3hattrio refer to their music as 'American Desert Music' a description that couldn't possibly be more appropriate, with the title of 'Dark Desert Night' giving further clues about the content. I should say straight away that not only is this one of the most unusual albums you will hear this year but it is also one of the best of the year and possibly much longer dependant on how it fares with long term listening sessions.
The 3hattrio are (fairly obviously) a trio that includes Greg Istock on vocals, foot percussion and acoustic bass, Hal Cannon, vocals, guitars, banjo's and Eli Wrankle on violin. There are two traditional songs and of the remaining nine, three were written by Cannon/Istock, three by Cannon and three by Istock and all eleven songs remarkably blend into an album that has an almost cinematically conceptual flow. I suppose in many ways it is a concept album with the songs linked by the deep arid atmosphere they create on this often quite sublime recording. Whilst the songs are not drenched in metaphor they are not always easy to unravel but are all the more rewarding for that as you progress, for the umpteenth time, through this tremendous recording that carries the listener along on its cinematic roller coaster.
The two vocalists styles are complete contrasts, both highly evocative and completely at home with the ethereal beauty of the sparse wide open desert spaciness of the music. It moves at a very slow tempo but one that strengthens the reflective tones of the compositions and highly descriptive lyrics, all combining to form a mellow sound with an often  spooky, haunting atmosphere. There can have been few albums that have more perfectly evoked a cinematic vision of the wide open desert spaces and yet at the same time had an almost overwhelming pervasive darkness. Even on the songs that are not overtly dark lyrically the general slow moody atmosphere and mainly sparse instrumentation evokes an almost alien feel, certainly to this 'city dweller.'
The album opens with a melodic, laid back guitar and  fiddle sound on Get Back Home, with Greg Istocks raw but evocative vocal being the perfect vehicle, soon joined by haunting harmonies, a powerful bass thump and the dry feel of a shaker. As the song crawls slowly along the feeling of wide open spaces under the hot sun is inevitable, with the occasional fiddle intervention adding to the songs depth. That is followed by Carry Me Away on which there is an acoustic guitar intro on a tremendous version of a traditional song, with a little percussion and old timey fiddle, joined by Cannons powerful vocal and various percussive elements that ensure the song, whilst thematically different, still retains the spacy desert feel albeit on a dark murder ballad. Tammy's Sister is a song full of intensity and darkness with banjo, bass and percussion on a haunting tale that is sung by Istock, with a meandering fiddle in the background supplementing the bass and repetitive banjo. The sawing fiddle, guitar and thumping bass on Western City Nights support Istocks atmospheric vocal with the haunting fiddle working its way in and out of a melodic tale that progresses through peaks and deep troughs giving it a quite spectacular feel. Another tremendous song and one that perfectly evokes its title is Sand Storm, with the light percussion, deep bass and guitar building the atmosphere, but the fiddle evokesconjures up a desert storm as do the lyrics that are perfectly emoted by Cannons deep atmospheric vocal performance. There is an almost African feel to the bass solo and what sounds a little like a percussive tabla in the background later on a spectacularly atmospheric tale.
Since starting on this review the album has been listened to countless times and as I suspected it seems to take on more strength with every one of those plays. Even at this early stage of the year it's safe to say the album will be a contender in my best of year list in nine or so months time. It may strike some on first listen that it is merely a pleasant, slow moody album with some nice melodies but it won't be long before the lyrics and the often dark atmosphere draws you in and you get lost in its otherworldly spookiness.