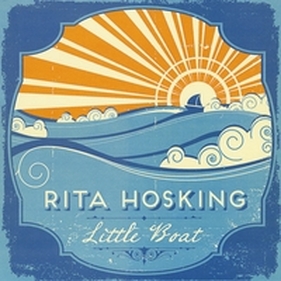 
The idea of hearing a more gorgeous or better balanced album than this in the coming year has huge appeal but I can’t
really imagine it is going to happen. There are only seven songs on a recording that clocks in at barely half an hour, but that is a half hour of sublime melodies, strong writing, perfect instrumentation and vocals that I can’t believe are not a young Nanci Griffith and then some! The length of the album is never a  problem, being so good that playing it over and over again is rewarding and just means the lovely melodies continue to grow on the listener. Rita’s vocal is a little unusual in that there is a real old timey feel, a totally natural ‘twang’ and a lovely range and power with character to spare.
The album was recorded in just four days, in November 2012, at the Austin home studio of Rich Brotherton, who also produces brilliantly. With his exception this is a real ‘family’ effort with Rita on lead vocals, guitar and harmonica, husband Sean Feder dobro and banjo, daughter Kora Feder on clawhammer banjo, and Rich Brotherton on guitar, bass and various acoustic instruments, but all of those instruments are used sparingly without ever being too sparse, allowing the evocative vocals to dominate the songs.
All of the songs are written by Rita although Where time is reigning was a co write with daughter Kora Feder. Whilst Rita’s vocal sound has much in common with Nanci’s, the same cannot be applied to her music. Despite both being labeled as ‘country,’ Rita’s music has a much stronger rurality and an ‘edginess’ that Nanci only showed glimmers of on several of her early albums, but none since. In many ways this is what can be described as‘real country music,’ with it’s roots and influences relatively easy to trace back to the early days of recording and as a consequence felling more powerful for it. So often songs of this nature have too much going on musically but the selection and use of the acoustic instruments on this album is just about perfect, leaving a lasting impression, but not to the detriment of the vocals or the stories being told.
Album opener Parting Glass is an excellent case in point with it’s lovely dobro and acoustic guitar sound supporting Rita’s beautifully expressive, character laden vocals on a song that rises and falls in all the right places with it’s gorgeous melody, on a poetic tale of mortality that never gets maudlin. It is followed by the co written Where Time Is Reigning, this one with a banjo and acoustic guitar and gorgeous two part harmonies with daughter Kora on an atmospheric song with a strong old timey feel and the subtly restrained sound of an organ in the background. Five Star Location is another beautiful banjo and acoustic guitar driven tale that thematically follows on from the previous song, with the struggles to survive when all the work has gone to other locations, despite living in an idyllic setting.
This is a pretty much faultless album that includes excellent playing, beautiful vocals and some powerful songwriting. If there is a slight fault it is obviously the fact that it is too short, if perfectly formed! Then again if there was eighty minutes of music of this quality on the disc I would probably then be bemoaning the fact that it is not a double album!