FOGHORN LEGHORN - ALL AT SEA 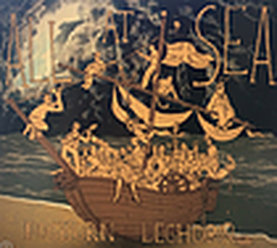 My opening remark when reviewing Foghorn Leghorns debut album 'Not before time' back in 2013 was 'If ever an album could be labeled as ‘genuine good time folk music with an old time hillbilly feel it is most definitely this excellent recording by Foghorn Leghorn.' Hardly a particularly inventive comment but definitely accurate and I could just as easily use that same remark when reviewing this excellent new recording titled 'All at sea,' in fact I suppose I just have!
The North London based band have been going for around 20 years now and in that time I've seen them 'a few' times and have always been impressed by the tightness, quality, songwriting and all round performances of this talented six piece band. Fairly obviously they get great pleasure from performing, with this being only their second studio recording in that two decades during which they have played numerous gigs including a now regular once a month residency at a London pub during which they introduce special musical guests.
The lineup is as it was on their previous album, that is Tim Kent on banjo, Eamonn Flynn, mandolin, Kevin O'Neill plays dobro, Del Brooks, guitar, Chris Clarke on double bass, Paul Faye, fiddle and all of them on vocals, but not always together! Whilst their music is often referred to as 'Bluegrass,' as is so often the case that one word does them no credit; there being so much more to their musical makeup than just one pretty much nondescript word. Certainly on this recording there are detectable elements of country, a frequent country rock feel, obviously bluegrass, an occasional folksy edge, but there is never anything predictable, with plenty of variations in tempos, with often current themes, always with a distinctive edginess, depth and dynamism that few other bands playing in similar generic fields can even hope to match. There is a relaxed 'ramshackleness' to their performances that can only be achieved by a highly skilled group of musicians, comfortable in playing together and knowing instinctively what each is about to do or by a bunch of idiots so drunk they don't know what they're doing! It's incredibly reassuring to say that Foghorn Leghorn is the former!
Of the twelve excellent songs on the album seven were written by Eamon Flynn. two by Chris Carke, one by Paul Faye and two by Tim Kent, including the tremendous instrumental Fundamental breakdown. The first song on the album, the Chris Clarke penned, All that remains gets underway with banjo and fiddle to the fore with throbbing bass giving excellent support on a hard driving song that veers towards bluegrass and includes some excellent harmonies and a memorable melody, an album opener that sets the scene beautifully for what is to follow. Next up is Eamon Flynn's Love and money with banjo, lovely dobro, fiddle and bass plus guitar on another excellent speedy mid tempo song that almost has a call and response element to the chorus. There is a nice textural change that gives the song added power followed by a dobro lead and we're off again on a composition that whilst containing many bluegrass elements is none the less generically unspecific, also including folksy elements and much else besides, including a little, if not humour, at least a lighthearted touch! Eamon's Man I wanna be has a lovely flowing sound and harmonies that remind me of something Michael Nesmith may well have done many decades ago but I can't for the life of me remember what it was on this song that contains some lovely dobro sounds with the 'plinking' banjo. The bass and banjo intro is soon joined by the tremendous, flowing band harmonies with occasional mandolin, in some ways  creating a Beach Boys like effect, but also somehow being a little reminiscent of the High Llamas. It is that sort of song and the only track on the disc that has this effect showing just how skilful and versatile this band is. Beginning to hurt is another excellent Eamon Flynn composition and vocal with gentle acoustic guitar for support on a nice slow ballad that soon has a dobro and fiddle intervening adding a nice 'swatch' of colour to proceedings. There is even a gentle mandolin complimenting the dobro and some more excellent band harmonies adding depth to another terrific song. Final mention is of Paul Faye's The whole world (in his tiny hands) a dramatic mish mash of sounds that often has a 'gypsy jazz' feel although there is plenty of 'americana' in its makeup. It is generically different to most (but not all) of what has gone before but still, thanks to the tremendous playing and harmonies, recognisably 'Foghorn Leghorn.' The mandolin, fiddle, guitar, percussion, bass and banjo sometimes create a sound that approaches, but never falls into, a cacophonous feel and yet is melodic, has depth and the full sound adds another string to the musical bow of this talented incredibly tight band!
It would have been nice to have had far more recordings from their twenty year career than just two tremendous albums and maybe if this one gets the success it so richly deserves there will be more but if not look on the bright side; this is a band that gives completists an easy ride!