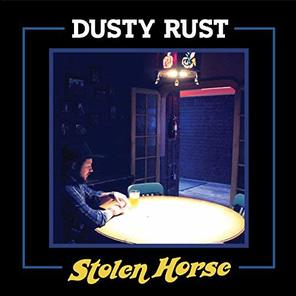 Virtually unknown in the U.K but to my ears far superior to most of Nashville’s more famous ‘hat acts’ who seem to populate most of the charts today, Dusty Rust is a modern country singer in the truest sense of the words. He has his own unique vocal style that whilst having a contemporary feel is a 'country mile' from many of the chart vocalists who, at least to my ears, blend into one, thanks to over production and few if any stylistic variations. Not so Dusty Rust. Whilst not actually sparse the arrangements are designed to get the best out of the songs without ever over doing things or adding any unnecessary colouring, allowing his vocal full reign to express these excellent country songs. Of course by keeping the arrangements relatively sparse, variations and changes to tone and texture are possible bringing not only a huge degree of individuality but also a note of uniqueness that sets him apart from any would be peers.
This excellent recording is Dusty Rusts third album and follows on from 2015s ‘Kansas City cowboy’ and 2013s self titled debut and whilst they were uniformly excellent 'Stolen Horse' ups the quality by several notches, with his vocal being more commanding and confident and the arrangements even more 'individual.' This recording could be termed 'classic honky tonk,' were it not for the fact that Dusty has pushed its boundaries in an outward direction creating a much more expansive sound and dynamism. Whilst the song writing is top notch and the playing and vocals excellent, the arrangements give the album that extra something special, even including what can almost be termed, a little edge of psychedelia, at least occasionally! Don't expect a psychedelic freakout though! This is an album of pure (almost) contemporary country music, but it is the excellence of those arrangements that lifts the recording above most of Dusty's peers and gives the album a strong sense of individuality and even originality, something that is rare, perhaps even unique, in 'contemporary country music!'
The 'band' on this album is led by Dusty Rust on all lead vocals, guitar, baritone guitar, bass, piano and drums, with the talented Chad Graves playing pedal steel, lap steel, dobro and banjo, and the equally talented Pat Fiddle on (yes, you guessed it!) fiddle. Last and far from least, the singer songwriter and one man band AJ Gaither played harmonica. Of the nine songs, four were written solely by Dusty, two in conjunction with Tyler Giles, one with Chad Graves, one with Tyler Giles and Brooke Blanche and Don't wanna go to heaven by AJ Gaither. Every song is excellent, both lyrically and melodically and the arrangements give the recording a unique sound that whilst different to what they are used to, should even hold huge appeal for 'contemporary country music' fans!
The album opens with the melancholic tones of a steel and gentle acoustic guitar on No one to blame before speeding up with a dynamic addition to the intro that takes on a 'spaghetti western' feel. Soon, Dusty's warm expressive, 'classic country' vocal comes in on a tremendous story song that could easily be imagined as a vehicle for the late Marty Robbins. It is a quite epic tale that has a deep 'twangy' guitar break and in so many ways defines the 'classic country' story telling with its varied tones and tempos. I was wrong gets under way with a lovely banjo intro backed up by guitars and bass leading to another tremendous vocal performance from Dusty, with his voice having that 'high lonesomeness' that gives many of the songs, particularly this one, huge appeal. It is a high quality 'aching heart' song and one on which the regret in Dustys vocal is palpable. Some gentle effects introduce Arizona, before the twangy and acoustic guitar come in, soon joined by the harmonica and Dusty's excellent vocal. The throbbing bass sets a gentle pace and the tuneful electric guitar adds a variety of colours to yet another excellent song that latterly includes some treated guitar sounds. In some ways that causes the song to teeter on the edge of the country genre but rather than spoiling things it simply adds more diversity and power to the album and lets the listener know that whilst the contemporary country sounds might be to the fore on this composition it is not always generically tied to that one style but is extended by a little experimentation, something that 'country pop' would perhaps benefit from! Final mention is of The pursuit pt. 1 a tremendous song that kicks off with a haunting acoustic and steel guitar intro leading to Dusty's equally haunting vocal with an excellent treated twangy guitar on another epic tale, this one of death and pursuit on a classic western themed song. The songs arrangement never loses that eerie haunting atmosphere, something that must be difficult to sustain and the intensity builds with the sound of a distorted guitar and the metronomic bass offset by an excellent 'rock guitar' solo on a song that has a powerfully epic, almost cinematic feel.
Stolen Horse is an album that stylistically is not a million miles away from modern day 'commercial country' and with a little promotion could easily 'cross over' and see sales go through the roof. Having said that, it is a long way from the usual over production from which albums that inhabit the charts often suffer, but the basic roots are there; it's just that Dusty Stray is closer to the 1940s and 50s 'traditional country,' with the songs having a nice edge, the arrangements never including any extraneous colouring, the vocals uniformly excellent and songs so good that it is unimaginable that others won't pick up on them. This really is a tremendous 'country' album by a talented man who, assuming the record buying country music fans will accept a lack of sanitization, is set to bring 'real country music' to the masses!