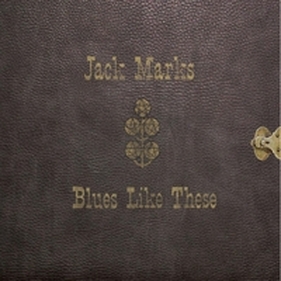 
I wrote in some notes during the first few listens to this excellent album that at times Jack Marks vocals are reminiscent of Dr. John, John Prine, Peter Case and even Tom Waits! Musically he also covers the broad spectrum of roots music inhabited by these esteemed artists. That is not to say he is a copy of any of them, it is more a fact that he covers various diverse aspects of roots music in his own inimitable style and with great individuality, often including a little humour and a nice lightness of touch. There is even at times a distinct Band influence that occurs due to the epic nature of a few of the songs, something that is probably not surprising bearing in mind that Jack too is a native of Canada. This is a sure sign of a talented artist at work, with his ability to move from the epic to lightly humourous on several occasions on a single album, and yet he never loses the rootsy bluesy thread that binds the songs together into an album of high quality.
This is only his third album, certainly that I’m aware of, and yet right from the off he had a fully realized style of his own, almost as if he’s a dozen albums into a long career and has managed to blend all of his various influences into a roots syle that has a good deal of originality. The same can be applied to his songwriting that covers a variety of subjects and he is not afraid to jump from upbeat, up tempo songs to the opposite extremes, with a varied instrumentation.
The core band is Jack on lead vocals and guitar, Aaron Comeau, bass, harmony vocals, mandolin, accordion, clarinet, banjo and piano, David Aide on B3 organ and Pat Phillips on drums. Aaron Comeau also produced the album and obviously, with his multi instrumental prowess, had a huge influence on the album of all self penned Jack Marks songs.
Album opener Blues Like These has a smoky New Orleans rhythm and blues feel with Jacks vocals not a
million miles from Dr. John, accompanied by a nice guitar, organ and piano sound. This is followed by Plant Me A
Garden, an excellent upbeat humourous tale in a similar mode to John Prine’s lighter moments, given a lift by the instrumentation that includes a lovely chirpy accordion sound. Song For Me is a song that has an innate sense of drama on an unusual, reflective song about someone not having a song written for them, with that drama enhanced by a lovely accordion and moody chiming guitar. On Maggie’s Hardware Store Jacks vocals are at their most raw and gravelly on a song that has an epic feel with a gorgeous accordion break and lovely chiming mandolin that contrast nicely with that rawness of Jacks vocal. I thought This is A Stickup was the best song on this album of tremendous songs with it’s moodily solemn, if gorgeous, accordion throughout supported by amongst others
the lovely chiming mandolin on a song that has a lyrically, as well as musically, epic feel. This is almost matched by the album closer Blues I Have, a song that starts with a slow moody accordion before Jacks atmospheric vocal (that has just struck me as sounding a little like Steve Earle on this song) comes in on a dramatic tale that has an intense atmosphere thanks in part to the regimented drum sound that drives it on.
This is an excellent album by a talented artist who has taken a collection of disparate songs and blended them into an album that gets better with each subsequent listening session. His raw vocals have a nice melodicism
that should appeal to many more people given decent promotion and the overall enetertainment factor is enhanced by several truly epic and classy songs.