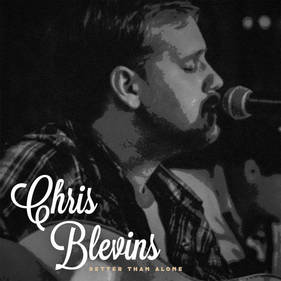 Chris Blevins is another fine addition to the long line of hugely talented musicians to come out of Tulsa, Oklahoma courtesy of Horton Records. This is his debut album, although judging from his confident and more than competent performance on these ten beautifully formed songs you would never know it! His vocals have the manipulative ability and strong character that is often found in jazz and whilst he may not have perfect pitch what he does have is an appelaing raw edge and a flexibility to his voice that very few people in roots music are able to emulate. Add those aspects to that depth of character that he seems able to conjure at will and you can't help but assume a long successful career lays in wait for this hugely talented singer songwriter.
This is not an album of pure country music, in fact many will feel there is very little country music in some of the songs, but there are strong traces in most, blended with a lot of rootsy rock on an album that at least initially sits in similar territory to the work of John Hiatt, in other words, generically ambivalent!
Chris Blevins himself plays acoustic guitar and all lead vocals, with producer Chris Combs on electric guitar, lap steel and synthesizer, Aaron Boehler on bass and backing vocals, Andrew Bones handles drums and percussion. Also helping out were the highly rated John Fullbright on wurlitzer, Chris Foster, piano with Corey Mauser and Jason Weinheimer sharing organ duties. The ten songs are all beautifully written and performed Chris Blevin originals on this debut album that is chock full of great promise for the future.
A heavy percussion and guitar sound gets rootsy rocker, Big man off to a rip roaring start that is soon joined by Chris Blevins tailor made vocal on a tremendous album opener that will draw every listener in with the excellence of the lyrics and the upbeat, up tempo arrangement. On Abilene there is a nice twangy intro accompanied by a haunting steel guitar on a beautiful country ballad. The suppressed Keyboards in the background fill out the sound with the metronomic percussion and an excellent lead vocal, with a gorgeous steel guitar break and a melodic guitar solo on a song that has a deep, cinematic atmosphere. Daydream has a nice 'chugging' sound and another excellent vocal on a song that has an arrangement and instrumentation that has an almost jazzy feel, similar in texture and the relaxed atmosphere to some of the work of the mighty Steely Dan. There is much more flexibility in this song, sometimes giving the impression of an improvisational edge, particularly in the vocal performance. I suspect that when playing live the flexibility of his vocals allow him to never play a song the same way twice. Final mention is of Songs a composition that signals another textural change on a tale that has a slightly unusual set up but one that works beautifully with the solid throbbing bass, chiming guitars and piano all giving excellent support to the vocals, even including a gorgeous steel guitar break.
Whilst this is Chris Blevins debut album it is immediately apparent that he is a man who whilst having some fairly strong 'country roots' is unlikely to ever be restricted by one generic title. His vocals alone will lead listeners to the impression that exploration of his limits will take him far beyond one style and when you add his writing, which is very much topic driven rather than style possessed it becomes obvious that here is a man who has a unique individuality that really knows no limits. His next album should be interesting, as will be its successor and so on and so forth!