THE SUMNER BROTHERS -
TO ELLIOTT IN REMEMBRANCE OF WOLF
​ 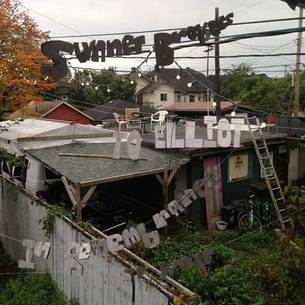 The Sumner Brothers have been and, with this unusual album, continue to be one of my favourite 21st century bands. If you have a love or even just a liking for pleasant easy going unchallenging music steer well clear of the Sumner Brothers despite the 'mellow' sounding content of this 'tribute' album. Their previous albums, in varying degrees, have explored 'roots' music from a completely authentic 'old time hillbilly' sensibility right up to a virtual 'heavy garage rock' dynamic, and yet there is always, again in varying degrees a powerful rurality to all of their musical explorations. What are they best suited to? I don't really know; it all depends on personal taste simply because they are so good at whatever musical form they turn their hand to. My own personal taste is for their more countrified 'hillbilly' music because that allows their own natural 'edginess' to shine through whereas the heavier rock contains its own natural dynamism. Whilst I'm always saying that the originators of recorded 'hillbilly' music way back in the 1920s were edgy, in many ways that edginess was part of the eerie atmosphere that is often suggested by very old recordings. Nothing is set in stone but the point I'm trying badly to make is that the Sumner Brothers project a powerful authenticity that harks back to the old days albeit with a modern sensibility that takes in the myriad influences they have been subjected to long after the old timers were gone.
'To Elliott....' is an unusual album because it contains recordings of eight 'cover versions' of songs that are meaningful to the Brothers, whilst also being a tribute to their friend, Vancouver based folk rocker Elliot C. Way and his deceased dog. Fortunately Elliott is still very much alive and thriving and is in fact a fine musician well worth investigating as evidenced by his 'youtube' videos.
Ridiculous though it may seem, It is difficult to imagine any of these songs getting a more heartfelt reading by the originators, or if it comes to that, any other artists who choose to cover them even including Bruce Springsteen's The ghost of Tom Joad! The recording shows uncommon restraint from the Brothers with the incredibly sparse arrangements, whilst the pair exchange lead vocals throughout the recording. I don't know what drove that selection process but Bob and Brian have kept the arrangements so incredibly sparse that their vocals are exposed to the world perhaps more than many singers would be prepared to do. Fortunately both are excellent vocalists and expose untold depths in their evocations of the subject matter. A case in point being the album opener, the above mentioned The ghost of Tom Joad. This is a tremendous version of the Bruce Springsteen classic that includes just acoustic guitar and a basic synth sound that combine with Bob's voice to engender all of the spookiness and deep atmosphere that are a minimum requirement for the song. I've played this and Bruce's version back to back several times and honestly can't say which I preferred, both being excellent if entirely different. There is just acoustic guitar and very restrained keyboard deep in the back ground as support for an excellent and hugely evocative vocal from Brian on Old skin, a song that many, perhaps most of us (me included) will be unfamiliar with, having been written by A.P. Dugas of 'The Ganges River Band.' There is an organ and acoustic guitar intro on Ride me down easy and as the organ fades Bob's excellent reading of the Billy Joe Shaver penned song takes over, eventually joined by a beautiful melodic electric guitar and interventions from a steel guitar. Finally there is another hugely evocative vocal from Brian on On the evening train a tremendous piano and acoustic guitar led version of the Hank Williams song.
I think a comment on the publicity pamphlet that accompanied this album probably best sum up the excellence of the recording.
These may be cover songs but they have been broken down and rebuilt with         simplicity and precision, giving them another life in another musical realm.
A truer word (or sentence in this case) was never written but don't get carried away by 'simplicity.' To record 'cover versions' of this quality in a setting so sparse that the vocals are always at the forefront and the instrumentation often relegated to virtual invisibility requires huge talent, something this pair of siblings have an abundance of. I said at the start that those wanting 'pleasant easy going music' should steer clear but on reflection they should purchase this album and then when they 'get it' they will be hooked and can look forward to exploring the Brothers incredible back catalogue of five albums. In so many ways I envy them for what lays in wait!