3HATTRIO - LORD OF THE DESERT
​ 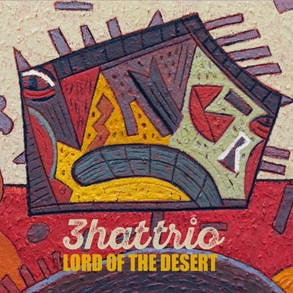 'Lord of the desert' is the 3hattrio's fourth album and the third to be reviewed on this website. Many, perhaps even most bands set out to be different to anyone else; a few actually manage to achieve that state, whilst a miniscule number just are different without the need for any subterfuge. The 3hattrio are such a band, and yet everything about their flowing soundscapes is totally natural and just oozes from these three talented men who not only live in a desert area but are absorbed by it and have a natural feel for their location that transfers itself into their music. And what music! To listen to any of the trios albums is to be transported to the wide open, sun scorched, arid wastes of the American desert. I say 'American desert' because to someone who has never been there the nearest feel we can have for the desert life is via those movies that had some sympathy for native Americans and have tried to give some sort of evocation of their spiritual lives without always showing them as the 'baddies.' This album and its predecessors achieve that state without any 'political' statement about the injustices and inequities but simply by writing and playing the music that comes to them quite naturally.
The trio are and have been from the off, Hal Cannon on guitar, banjo and vocals, Eli Wrankle, violin and Greg Istock plays double bass, foot percussion and vocals as well as recording and producing the album. Of the thirteen songs Hal Cannon wrote five, plus on Wastelands of Yesterday he wrote the music whilst the lyrics were courtesy of Paul Zarzyski. Eli Wrankle wrote the beautiful, atmospheric instrumental, Night sky as well as working with Hall Cannon on Lord of the desert and Greg Istock wrote the remaining five. The three are so finely attuned to each other's talents that the listener can be forgiven for thinking every track was written by the same person and follows a marked concept and yet the only real concept is the mysterious otherworldly desert location that the music is rooted in. On occasions the music has an almost improvisational feel such are the variety of textures that these three men create as they take the listener on a trip through desert life.
The album opens with a nice easy rolling banjo sound on Dust devil, with a little percussion supporting an excellent vocal and sympathetic harmonies on a song that as with most of their music creates a strange otherworldly atmosphere particularly when the fiddle comes in and solidifies the sound. It's almost unnerving how many bands strive to create an almost unearthly arid desert atmosphere with very little if any success but it seems to be so natural to the 3hattrio. On In our hands there is a bass intro with several other sounds and an otherworldly vocal and harmonies, not in terms of language but the haunting atmosphere that is created by the continually repeated title, with the atmosphere deepened by the eerie fiddle interventions on another strong song that has what almost seems to be a peyote induced otherworldly psychedelic edge. Immediately following that is War, with more haunting fiddle sounds introducing the song with other treated effects. It seems however this trio handles a song there is that natural arid, desert atmosphere that could have been drawn from 'Paris, Texas,' although this is even more haunting than that esteemed Ry Cooder soundtrack. The vocals have a strange treatment as does the instrumentation and to the new listener even at this stage, not yet halfway through the album, it will be obvious that this is a unique band, totally unlike anything they have heard before and totally addictive in the atmosphere they have created on this album that incredibly contains such sparse arrangements. Percussion, treated fiddle and several other effects introduce I am before the speed increases with the banjo coming in to join the lead and occasional harmony vocals although as with many of the songs the vocals seem to have a chant element in them as you would expect if the band were playing songs that were hugely influenced by the native American world, which no doubt they are. It is not music that is constructed in any kind of contemporary style but it is certainly not so far over the edge that it won't have some appeal for everyone given a chance. The gently sawing fiddle fades in with percussion, bass and banjo and a vocal that again helps create an otherworldly atmosphere on Motel with most of the instrumentation having a hypnotic metronomic effect but with the treated fiddle segueing in and out of the background. As the intensity builds the harmony vocals come in and the tempo and texture gradually change as the bass takes over but still with the metronomic banjo in the background aided and abetted by the powerfully haunting fiddle. Final mention is of Lord of the desert quite appropriately the final track on this extraordinary album with a haunting treated background fiddle supporting the sermon like vocal that in many ways gives a beautifully conceived summation of the album and its aims and achievements.
The whole album is both captivating and hypnotic. It is difficult to overstress the power of the arid desert pictures it paints whilst it also somehow evokes a life of struggle and hardship in that desert atmosphere. It is incredibly rare to find a recording that creates so many cinematic images but this one does throughout and yet those images are purely down to the individual listener and how they interpret these incredible soundscapes that are painted by the hugely talented 3hattrio.