OLD MAN MARKLEY – DOWN SIDE UP 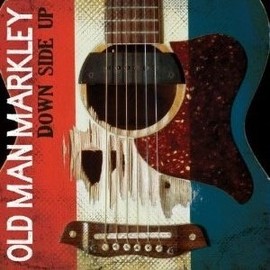 
On the face of it, this, Old Man Markleys second album, could be summed up as some very good well written songs, played with plenty of high energy punk attitude and encompassing folksy old timey blended with bluegrass. Of course, nothing is ever that simple, particularly when the music is played by an eight piece band who will never be accused of favoring a sparse sound. As a consequence of this, some of the vocals seem to be a little overwhelmed at times by the instrumentation. Where they are not, the album really benefits.
The lineup varies slightly from their previous album and consists of Johnny Carey on vocals and guitar, Annie DeTemple, autoharp and vocals, Joey Garibaldi plays bass and vocals, Jeff Fuller is on drums, Ryan Markley, washboard, John Rosen on banjo and vocals with Katie Weed handling fiddle and vocals and Alex Zablotsky on mandolin. If that instrumentation seems a little close to overloading, that is the case on some of the songs, but certainly not all. At times despite the quality of the drumming, I found myself wishing it would stop, and yet conversely that is the beauty of this band. They are not trying to copy anyone else and if they sometimes go a little over the top it is just their highly individual style at work that I would imagine comes across far better live than on record. Not that this is a bad album. It is very far from that, with some excellent songs, tremendous vocals and as I said in a review of their 2011 release Guts ‘n’ Teeth, full of‘drive, passion and sheer exuberance.’ This is a band that seems to favor instinct over a glossy sheen, with even the songs that I found more difficult to like, having merit in the way they were put together and there is always the excellent lead vocals and harmonies and exceptional playing, all things that can only be achieved by totally committed and skilled musicians. In many ways it is an album that has too many facets to really do justice to with the written word. I found that it responds to the listeners mood (and vice versa!) more than most, despite the fact that there is a variety of tempos and subject matter and whilst the acoustic instrumentation fits it into the folk/bluegrass sub genre the punk attitude changes that completely putting them into a pretty much unique field of their own. And yet, they certainly can’t be fitted under a classic punk label either, their overall musical qualities are far too great for that, with their often speedy playing always being controlled and of a high quality. Another nod to punk is their textural consistency, never smoothing off any of their fieriness or drive, even on the songs that are close to being ballads, something that some may see as a fault, but again rubber stamps their trademark ‘up front’ attack.
The bands original songs are all excellent with a few being exceptional and most contain thought provoking lyrics that were as relevant in the past as they are today. Rehearsal is a tremendous song that whilst having a fairly easy going tempo is a story of immigration centered on a musician trying to make his way in a new land. There
is an excellent guitar and fiddle introduction eventually joined by a lovely banjo with an evocative vocal from Johnny Carey (who handles most lead vocals) and excellent harmonies. This is followed by a song that has strong relevance today in our media heavy world but was just as relevant decades or even centuries ago. It is titled America’s Dreaming and starts slowly with just Carey’s vocal and guitar before taking off with banjo, drums and vocal harmonies on a protest against the world of politics and finance. Things change a little on the next song with Annie DeTemple’s excellent feminine lead vocal driving an up tempo song that contains banjo, fiddle , drums and even a brass section on a song that seems to echo 1950s rock ‘n’ roll and older vaudeville in equal measures! Beyond  The Moon is a sad sparse tale that name checks Gary Busey and contains little more than banjo, chiming bells, Carrey’s vocal and some nice harmonies, providing some relief from the hard driving tempos around it. Finally Up Side Down contains another lovely lead vocal from Annie De Temple on another hard driving speedy folksy punked up song with nice fiddle and banjo solos on a tale of how life can beat you down!
This is not a relaxing soothing album thanks to its fire and drive and that was not the aim of this excellent band, but if you need something to get you up and dance you could do a hell of a lot worse than use this recording as a powerful motivator! Certainly there are things I would like to have seen changed but ultimately if this band did change, much of their individuality as well as the energy would be lost. A very good album that not only repays repeated listening sessions but also contains considerable originality.