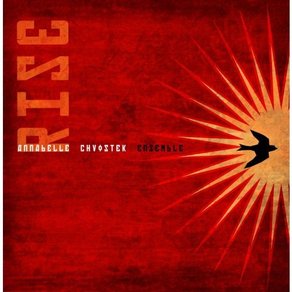 Prior to receiving my review copy of this tremendous album I was only aware of Annabelle through her work with the
‘Wailin’ Jennys,’ but on the strength of this album I’m looking forward to exploring her solo back catalogue. Make no mistake, this lady is a singer  songwriter whose talent is so exceptional that her ability to explore and master  any musical genre she wishes could actually work against her in commercial terms, simply because she is almost impossible to pigeon hole.
There seems to be such an outpouring of ideas that you get the impression the confines of a single disc are too restrictive for her, making the application of any generic label quite pointless when applied to this stylistically ambiguous album. It  seems to have amongst many others, influences that stretch back to the old timey Appalachian music, modern folk, eastern European, indie, roots rock and goodness knows how many other genres. What this actually leads to are a variety of sounds thanks to a fascinating instrumentation and Annabelles gorgeous vocals, but with each and every track differing in style from the rest of the album some will
find the scope just a little confusing. No one should let this put them off though with the plus side being that there are  some tremendous songs, just about the best and most versatile vocals around and an instrumentation that allows every song all of the breathing space it needs. Those gorgeous, expressive vocals seem able to handle any song and emotion and she has the ability to almost bend her voice with a slightly  unnerving flexibility, as well as being no slouch on fiddle and guitar! I think it’s true to say that the plusses far outweigh any minuses!
The album is produced by multi instrumentalist, former member of Rheostatics and now in Ron Sexsmiths band Don Kerr, with some quality musicians such as David Celia on guitars and Bruce Cockburn and Oh Susanna on backing vocals.
Of the twelve songs ten are Annabelle originals whilst the other two are quite exceptional versions of Lou Reeds Some Kinda Love and Peter Tosh’s song of protest and demand, Equal Rights. Annabelle’s G20 Song starts with lovely subtle guitar, bass and drums on a tremendous wordy song that kicks hard against the world of finance and the confusion and protest that encircles these summit meetings. This is a song that, thanks to her roaming versatile vocal, seems to inhabit a similar territory to Joni Mitchell’s ‘Hissing of Summer Lawns’ era, or even in some ways other left of centre artists such as Tom Waits. The same could also be applied to the mournfully eerie sound of Baby Sleep ‘Till Sturovo with it’s strong Eastern European influenced instrumentation and Annabelle’s as always beautifully versatile vocal. There is a change on the slow and moody The Will of How with the lovely sound of the accordion supporting Annabelle’s gorgeous flexible vocal creating an atmosphere not dissimilar to a late night
Billie Holiday ballad. The title track Rise has a nice flowing melody that wraps itself around the listener and stays in the consciousness on an uplifting song of protest aimed at a particular area of Montreal but analogous to any  locale, anywhere on the planet where local people feel strongly enough about something. Finally, a strong note of humour is added to proceedings on the chirpy Ona (In Toronto I Get More Hugs, In Montreal I Get More Kisses) a song that has a really nice easy going melody with acoustic guitar, bass, snare and includes some gorgeous
harmonies.
On the first few listens I didn’t really ‘get’ the album but gradually it started to draw me in with the tremendous versatility and quality that contains a large slab of originality, with the obvious challenge being, can she even match this recording in the future. Surely she couldn’t surpass it, could she?