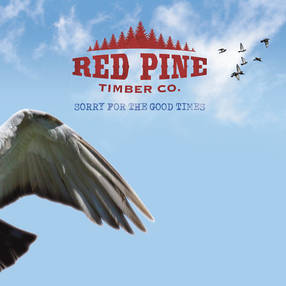 This is the second studio album from Red Pine Timber Co and follows on from 2014s excellent 'Different Lonesome,' although there has also been a live album in the interim which I've yet to hear. I remember hoping at the time that with all of the huge promise that debut showed, this band whose home is Perth, Scotland, would be able to afford to continue because the size of the band could well create difficulties. The lineup at that time was eight musicians and despite some changes in personnel there are still eight of them. It is incredibly pleasing to find that not only are they are still very much a working band but that the promise they showed on that debut has blossomed on this tremendous twelve song collection and confirmed the huge array of talents at their disposal.
The lineup now consists of Gavin J.D. Munro on vocals, guitars and harmonica, Katie Whittaker, vocals, Thom Bubb plays bass and backing vocals, David MacFarlane, fiddle, electric guitar and backing vocals, Neil J. Ewen plays saxophone, Chris Small on trombone, trumpet, harmonica and backing vocals, with Ivan Sveda on Drums and Michael McNab plays lead guitar and mandolin. Gavin Munro wrote all of the songs although on three tracks he wrote in conjunction with others and the album was recorded at Clearwater studios, Perth with co production by Munro and MacFarlane. The playing and vocals are always of the highest quality and whilst there may be eight or more musicians involved the sound is never overdone, with every instrument being essential to the wide scope of roots music that this genuinely different band covers.
Certainly as evidenced by the debut their roots are in that coverall of 'country music' but with the band members coming from a variety of musical disciplines there is far more to their music that I've seen accurately described as 'Americana' although, as with all generic labels, it's difficult to know where the border lies between so many sub genres that could be affixed to them, albeit loosely. Every song has at least a little 'country' in them although none are restricted by genre, the makeup of instrumentation and vocals simply reflecting the lyrics and what the band felt, justifiably to my ears, a particular song needed. Gavin Munro's vocals are warm, expressive and excellent whilst showing a mastery of ballads as well as up tempo 'country rockers and Katie Whittaker's voice is often quite stunning, with her being able to move from a mellow evocative beauty on country ballads to a power and soulfulness on a variety of other songs that most singers would kill to possess. The duets between the two work equally well as do the band harmonies on a range of songs which, as I've already said are predominately rooted in country but not exclusively so, with the 'brass section' often bringing a little R 'n' B or soul to the mix, particularly when Katie is really belting out the lyrics, in fact on occasions there are discernible elements of a hard driving late 1950s Rock 'n' roll. It is that sort of album; one that wears its roots for all to see but is never afraid of stylistic changes if required.
Propulsive guitars open the album's first song, If you want to, soon joined by the thudding percussion and brass before the excellent harmony vocals come in from Gavin and Katie on a dynamic rocked up song that is distinguished by a memorable melody, those harmonies and the raw power of this excellent opener! Hollow tree gets off to a much gentler start with weeping steel guitar and acoustic before Gavin's excellent vocal comes in soon joined by the thudding bass and percussion. Katie's harmonies join Gavin's lead and eventually the brass on an excellent slowish tempo ballad that rises and falls in intensity. Latterly there is a gentle mandolin break before Katie's vocal goes off on an exploratory break on a beautifully constructed and arranged song. Put down the bottle is another song that starts gently with the steel guitar and melodic electric guitar aided by the bass and percussion leading to a beautiful restrained vocal from Katie, with the weeping steel gradually coming to the fore. It is another beautifully melodic song with some nice harmonies, all played at a slow pace and with a lovely moody sax break midway, with the eventual inclusion of a beautifully played trumpet providing an uplifting centerpiece for the song. Speedy electric guitars and steel lead into Katie's lead and Gavin's harmony vocals on Cutting you loose, joined by the percussion and bass on a song that is reminiscent of the way that Gram and Emmylou worked together on songs such as Ooh Las Vegas. Bearing in mind some of the performances and duets on this album, that is not an overly exaggerated comparison. Finally, the gentle steel, clarinet, percussion and bass lead into Gavin's excellent lead vocal on Bar stool with Katie on harmonies on a beautiful ballad that has an appealing edginess in its makeup. As the song progresses Katie comes in more as does the fiddle, with a chunky, melodic electric guitar adding to the mix along with the trombone,  although the instrumentation is always restrained and never dominant, allowing the vocals to express the sentiments in this excellent 'country ballad.
All in all the Red Pine Timber Company is a multi talented band that includes everything that is required to get the best out of  every one of the excellent compositions on this album and one that helps create a pretty much unique sound that includes all of the soulfulness that is often missed by lesser bands. As I said earlier I am so pleased they have carried on and that they have, with 'Sorry for the good times' actually improved on their debut I'm now looking forward with some confidence and huge anticipation to their next release!