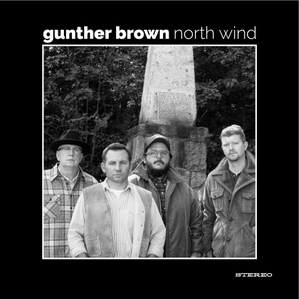 I saw one description of Gunther Brown as 'Americana rock,' probably a pretty accurate summation of the bands stylistic leanings but as usual with these descriptions it sells the band short thanks to their ability to manipulate a number of sub genres, a range of emotions and a variety of tempos and dynamics.
The band is centered around Pete Dubuc who takes all lead vocal and plays guitar, Derek Mills is on drums, Chris Plumstead, guitar and vocal and Mark McDonough on bass. All of the songs were written by Pete Dubuc although there are a couple of co-writes with Mark McDonaugh and one with Hallee Pottle on this, the second album this band, from Portland, Maine, have released, the first being 2014s 'Good nights for daydreams.' Apparently that first recording was much more countrified than this excellent sophomore release that certainly has some very strong country elements but also rocks as well as most rock bands. The playing is excellent and the ten songs all beautifully written but I feel it is Pete Dubuc's vocal style that will go a long way towards giving the band their signature sound. He seems able to go from a rasping fieriness to a relatively mellow reflective voice at will, but without ever losing a strong melodicism.
The album commences with What's Left a song on which the feedback at the start of the song makes the listener think perhaps this is going to be a pretty good straight roots rock album with Pete Dubuc's distinctive rasping vocal giving them more than a chance of success. The chugging guitar sound and changes in texture throughout confirms this opinion with very little that could really be called 'Americana,' but things soon change! The melodic chiming guitars on the intro with the acoustic guitar forces a rethink on the very next song (Don't Forget To) Don't Go although Dubuc's vocal is still what binds the sound together. The gorgeous steel guitar on this mid tempo, sometimes country rocker, starts to raise the suspicion that perhaps rather than just being a very good band this outfit may well have something very special in their makeup. That is confirmed on the next song Norridgewok with its chugging electric guitars allied to solid bass and percussion getting this beautifully written and performed tale of great tragedy off to a flyer at a speedy mid tempo. It can probably be classed as country rock but really the story is so sad it virtually defies description. During a break the harmonica comes in, echoing and highlighting the pain and tragedy before the song takes off again. Sweet Marie is an unusual song that starts with a background effect that sounds a little like one of the elements the theremin was capable of, with acoustic guitar playing gently over the top before Pete Dubuc's emotive vocal comes in on a lovely haunting ballad. Finally, melodic guitars support Dubuc's evocative vocal on Jesus Ain't Listenin,' a classic mid tempo country rocker that also includes a strong story line, with great support on the chorus from the 'Halo Gospel Choir.'
This is a really strong album that can sit with relative ease in the aforementioned loose sub genre of 'Americana rock' although I prefer, if affixing generic labels, to include 'country' in the description thanks to the songs that are more restrained and contain  chiming guitars. In fact, in many ways it seems to me that these are what most suits the band and puts them a little more firmly under the 'alt. country' umbrella that will probably show more acceptance of their highly individual take on the sub genre. Gunther Brown are genuinely a band that are doing things a little differently to most others and their individuality should, given the slightest chance, set them apart and make them immediately recognizable, giving them an excellent chance of major success