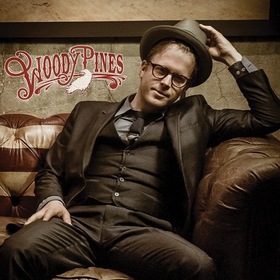 This is Woody Pines fifth album release, sixth if you include the 2012 mini album 'You Gotta Roll' and there is a consistent thread that binds them all together, the 'swing!' Woody spent four years busking on the streets of New Orleans with Gill Landry in the Kitchen Syncopators, who, incidentally are well worth investigating, although their few recordings are not so easy to find. This was ideal preparation for Woody to find a natural style and what would grab people's attention, those streets not being the easiest place for a musician to make a living. This shaped Woody's writing and his ability to sing his own songs as well as old classics and always put his own unique stamp on them.
His warm, expressive vocals perfectly emote a stylistically decades old music, with a little 21st century updating, but not too much! In many ways it is a stripped down version of the classic 'Western swing' style or 'Hillbilly Boogie,' perhaps with a gypsy jazz element, but whatever the label it is all performed with Woody's own inimitable sense of style. Even on the songs that don't really swing that element is still in evidence something that is obviously in Woodys make up.
The lineup is Woody Pines, lead vocals, guitar, toy piano and harmonica, Brad Tucker on guitars and vocals, Skip Frontz, bass, percussion and vocals, with Mitch Dane on electric autoharp, percussion and piano. Whilst the guitars of Pines and Tucker add their beautiful melodic sounds to most of the songs, Frontz's bass and percussive skills are worthy of more than just a mention. He seems to bring a dynamic melodicism to the songs as well as underpinning everything with a solidity that few can match, allowing the guitars and vocals the freedom to explore the songs with no chance of losing the timing or tempo, whilst Dane fills in the gaps and provides excellent diversity with his variety of sounds. Add all of this to the fact that Woody's vocals make them instantly recognizable and it is no surprise that their profile continues to move in an upward direction.
Of the songs five were written by Woody Pines and Leif Hatfield, one solely by Woody and five covers of old classics including a tremendous version of Irving Berlin's Walking Stick. Album opener Anything For Love, penned by Pines/Hatfield starts in vaudevillian fashion but then changes with a gypsy jazz sounding violin. There is powerful bass sound and Woody's vocal really swings, with only occasional intervention from the guitar. This is followed by an excellent mid tempo reworking of Bob Shad's oldie, Junco Partner, enhanced by a lovely melodic guitar sound, a hard driving bass and percussion, with Woody's atmospheric vocal to the fore. Woody's Little Stella Blue is a lovely slow ballad, with solid bass, gorgeous chiming dobro and steel guitar matched in pace but not musically by This Train Rolls By. It has a much darker feel but is an excellent song with the usual driving bass laying a solid foundation for the melodic guitar sound and Woody's evocative vocals on an excellent song that swings along gently but atmospherically on a tremendous Pines/Hatfield composition. Black Rat Swing, as the title suggests, is another great swinger, this one penned by Ernest Lawlars.  There is some tremendous guitar playing and a shuffling percussion on a mid tempo story with Woody's excellent vocal and the ubiquitous bass and percussion this time given a solo!
I've seen Woody and his band live on several occasions over the last few years and their musical skills are never less than peerless as well as hugely entertaining. They seem to have the ability, that many lack, to be as addictive on their recordings as they are live. They are a tremendous, highly individual band and the same can be applied to this hugely entertaining album and its predecessors.