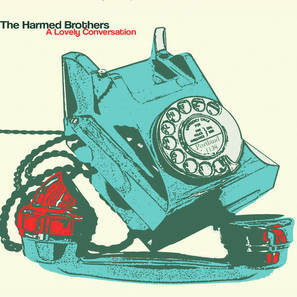 'A Lovely Conversation' is a promotional conundrum! It is being pushed as an e.p. but with seven songs clocking in at just over half an hour is more of a mini album, although we've all seen 'full length albums' that are shorter. Whatever it's promoted as, for listeners it's a win, win situation in as much as it is a Harmed Brothers recording and includes all of the variety and musical quality that goes with that name, and even better, is a precursor to a new full album set for release in early 2017. I wrote a highly positive review about their 2012 album 'Come morning' and was even more positive about its successor 2013s 'Better days,' so how does this e.p shape up? Very well has to be the answer to that. Despite its brevity, the quality is as you would expect from this talented band and the variety within those seven songs ensures that it's no hardship playing the recording on constant play.
The title song of this recording, A lovely conversation is actually the first single that is being released from the new album and the other six songs are all re-recorded 'b-sides.' Three of them are fresh arrangements of songs that were on their now out of print 2010 recording 'All The Lies You Want To Hear' making this a more than adequate taster of what the Harmed Brothers are about, as well as pointing to a slight variation from their previous albums with a little more electrification on this.
The brothers are not actual siblings in anything other than musical talent and vision and consist of the duo of Ray Vietti on acoustic guitar and vocals with Alex Salcido on banjo, vocals, electric guitar, piano and keyboards and the two combined to write all of the songs. The duo co-produced the 'e.p' with John Shepski who also contributed guitar and there is quite a list of further musicians who helped out with drums and a variety of brass instruments, including artists of the calibre of Anna Tivel and the Calamity Cubes. The sound on these songs is much more expansive than we are used to from the Harmed Brothers and it will be interesting to hear the new full length album to see if they have simply expanded their sound or changed it completely! I certainly hope they don't stray too far from their previous recordings but have to keep in mind that no self respecting musician wants to stand still.
The title track and first single from the new album is the opener of this recording, A lovely conversation gets underway with a mellow acoustic guitar intro joined by chugging electric guitar, thudding percussion, bass and keyboards with an excellent lead and harmony vocal on a dynamic song that burns fairly slowly as the intensity builds. Eventually the sound takes on a similar sound to a more restrained 1960s psychedelia although the vocals keep the rootsiness grounded. It is a song that works beautifully in this format and would be just as easily imagined as an acoustic song. That is followed by One in the garden, a tremendous song that is epic in length and scope with the duo's lead and harmony vocals at their peerless best. It is a song that veers from a fairly gentle mainly acoustic style to again include a little psychedelic edge that then moves into a powerful countrified sensibility, slowly and almost imperceptibly changing the intensity and developing the instrumentation; not necessarily changing it, but highlighting the different instruments, despite using very few. We are introduced to Bottle to bottle by a lovely acoustic guitar and mandolin on a quite stunning ballad that to my ears has the quality and atmosphere of an artist such as Willie Tea Taylor, which from me is huge praise. The instrumentation gradually builds with the inclusion of a gorgeous dobro sound, fiddle and quite plaintive keyboards with a hugely evocative lead vocal and the usual excellent harmonies. A gorgeous song that however the duo had worked it couldn't have been improved upon.
This fairly brief recording is a tremendous taster of what will follow on their new album when it is released. If, as I suspect, they have just developed, rather than completely changed their musical style I'm pretty certain that I and many other will be talking about that new recording as a potential years best. I haven't played their two previous albums recently so am working from memory but the more expansive sound of this recording adds to rather than changes their already tremendous music, perhaps pointing the way to huge success. I for one certainly hope so.