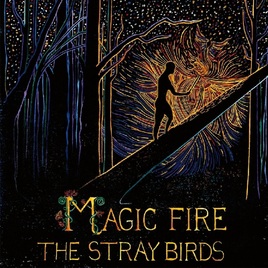 This is the third full album by the Stray Birds and confirms my suspicions, aroused by their first two recordings, that this was a band destined for great things. Those first two albums were both tremendous recordings but on this one their sound has developed further as you would expect it to with a producer of the calibre and imagination of three times Grammy winner Larry Campbell who was helped out by, also three times winning engineer, Justin Gulp. It is not that the bands talents were insufficient to take them further, they were most certainly more than sufficient; it's just that they needed to push on with their ambitions and these two were ideal for getting the best out of the band and helping them to stretch themselves further with their folksy Americana roots music.
All three members of the trio have been there since the beginning and have been friends for most of their lives, all hailing from Lancaster, Pennsylvania. Maya de Vitry plays fiddle, guitar, and banjo in addition to vocals with Oliver Craven also playing fiddle, guitar, and mandolin in addition to vocals and Charles Muench is on bass, banjo and vocals.
The sound is more expansive than previous recordings and much fuller, bringing a greater dynamism than that of its predecessors, although the recording never loses sight of the bands past triumphs, simply extending their sound rather than completely changing it. There are varied tempo changes and themes on these beautifully written and performed songs two of which were written solely by Oliver Craven, two by Maya de Vitri, three by the two combined, one was by Maya in conjunction with Lindsay Rilko of recent favourites, Lindsay Lou and the Flatbellys. One was by Charles Muench, one by a combination of all three, another by the trio with the assistance of Shane Leonard and one by de Vitry and Larry Campbell. It is that varied solo and combination of songwriters that helps broaden the thematic scope, atmosphere, depth of sound and the tempos of the album, perhaps more so than their previous recordings, not necessarily better or worse, just different.
The album opens with an acoustic guitar intro that is soon joined by Maya's powerful, evocative vocal, with thudding percussion and some tremendous band harmonies on Shining in the distance, a gorgeous ballad that has a lovely full sound but not one that gets in the way of the vocals and includes a lovely fiddle break. There is a sawing fiddle on Sabrina with guitar and percussion getting a Cajun inflected song off to a flyer with Maya on lead vocal and the usual excellent harmonies on another beautifully written song, this one performed at a speedy mid tempo. There is a fiddle intro on Hands of man that makes the song sound like the start of a hoedown which is then joined by percussion and bass followed by Maya's vocal along with Oliver on a composition that creates the impression of being an update of 'old timey' music. There is a beautiful steel guitar and fiddle intro on Somehow, with percussion and bass adding a solid foundation before we go into a beautiful country duet a la Gram and Emmylou. That is a comparison that is often used but in this case it is accurate on a song that has beauty and a distinct edginess, with absolutely no sanitization. Sunday morning is generically ambiguous; at times having a honky tonk feel, at others a slight jazziness, with the harmonies often sounding like 1940s and 50s 'sister groups,' with an excellent lead vocal from Oliver supported by an upbeat instrumentation that includes chirpy fiddle on a tremendously upbeat tale. Finally, Mississippi Pearl includes a lovely melodic guitar and steel guitar in support of Maya's dynamic vocal on a beautiful ballad, with some stunning harmonies on a classic modern country song that has a hugely evocative atmosphere.
Some, who have followed them from the start, may feel there was no need for a more 'expansive' sound but that loses sight of the fact that as hugely talented individuals they have the need to stretch themselves further rather than taking the easy option of standing still. There are one or two minor aspects of this album that weren't quite to my taste but as with its predecessors it is an exceptional album and another milestone in their development. Long may they continue to push their boundaries in an outward direction!