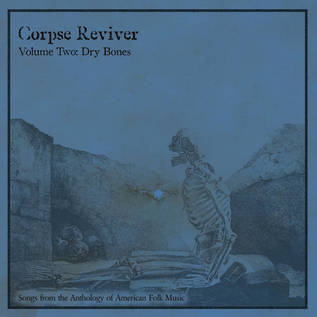 The Anthology of American Folk Music, edited by Harry Smith. This six c.d set could be the most important and influential compilation of 'roots' music ever released, kick starting the 1950s and 60s folk revival and to a degree the blues revival. First released in 1952 and re-released as a six c.d collection in 1997, the list of musicians who pay homage to the esteemed Harry Smith and his work is pretty much endless but includes such luminaries as Bob Dylan, whilst its influence continues to expand into the modern day and devotees such as Adam J. Kiesling, Jillian Rae and Mikkel Beckmen, collectively known as 'Corpse Reviver.' This is their second tremendous recording that re visits the songs, or at least some of them, from that incredible compilation of eighty four songs. There are eleven tracks on this album, following on from the ten on their 'Volume 1: I'll be rested when the roll is called, debut.'
The trio is based in Minneapolis, home to many great roots musicians and can boast the talents of Jillian Rae, who plays fiddle and vocals, Mikkel Beckmen, percussion and Adam Kiesling, guitar, banjo and most lead vocals. All three play with numerous other solo artists and bands with Mikkel Beckmen being the 'go to' percussionist for anyone in that part of the U.S who needs some expertise in the percussion field, including the great Charlie Parr. Jillian also plays with numerous other people, too many to mention here, as well as having a solo career, with her excellent debut album 'Heartbeat' having been released in 2013. Adam Kiesling is another who plays with and has played with numerous other people, including the always excellent 'Pert Near Sandstone' as well as having a solo career. Much of his time is spent playing 'old timey' music, and he has two tremendous solo albums out, the terrific 'Unclouded Day' having been reviewed on this site in 2013 as was Corpse Reviver's debut 'Volume 1: I'll be rested when the roll is called.'
So, as the reader will have guessed by now, this is not a mere 'covers band' but a trio of huge, if diverse talents, who bring their own individual take and influences to an ages old musical form. They succeeded in freshening up the old songs whilst not straying too far from the essential depths and feeling of the originals on that tremendous debut. To my ears this new recording takes things up a notch, not in terms of quality, but more the freshness, openness and the solidified direction, as if there is unfinished business they are determined to follow through on. I hope they do because there were eighty four songs on that original collection so we could be looking forward to a good many more recordings by these devotees of Harry and indeed much of the old roots music. Add to that the twenty eight tracks from the latterly released 'Volume 4' and this series could run and run!
Things get under way with I wish I was a mole in the ground, driven by percussion, banjo and fiddle before Adam's deep expressive vocal comes in. The song has a genuinely authentic old timey flavour with its slightly spooky atmosphere. That spooky slightly otherworldly feel is essential to these old songs and can only be created by attacking the song with deep feeling, a genuine understanding of the culture that existed at the time of the originals and with a complete lack of artifice, something this trio and very few others are able to achieve. Down on the banks of the Ohio is one of the all time great murder ballads, as evidenced by the number of times it has been recorded and by the variety of people from just about every generic field who have tried to master it. Corpse Revivers version is one of the better ones, capturing much of the atmosphere of the original. The guitar and fiddle intro helps create a high lonesome, mournful ambience that is soon emphasized by Adam and Jillian's atmospheric 'old timey' vocals on what is perhaps The classic murder ballad. This is an absolutely beautiful and heart rending version of a great song that in all probability will never die. The fiddle breaks further enhance the sad high lonesome feel beautifully aided by the restrained percussion and guitar.  On The Butcher's Boy the acoustic guitar, thudding percussion and Jillian's lovely expressive vocal are supported by the eerie, haunting sound of the fiddle on another great version of a classic song, in fact this is almost as haunting as the original! Whoop! Includes tremendous percussion and fiddle on an 'instrumental' played with all of the fire and exuberance necessary to get the best out of an almost spooky tune. Great playing by all concerned on a track here referred to simply as Whoop but in original form was Indian war whoop. Finally we're treated to a beautiful version of the classic Engine 143 with fiddle to the fore supported by guitar and percussion with Adam on lead vocal and Jillian adding her beautiful harmonies on another harrowingly sad tale.
The obvious aim of Corpse Reviver is to not only play the old music they have a great love for but to try and bring freshness and a little modern appeal to some truly classic compositions that must not be allowed to die. To say they have succeeded with both this tremendous recording and its predecessor is an understatement! There are many bands who strive for the same thing but none that I can think of who do it better than Corpse Reviver.