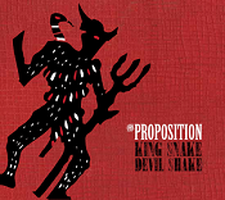 This is an unusual album that seems to cover many aspects not only of American roots music but also English and as a consequence has a pretty much unique sound. The Proposition are an English band who have worked together for many years and although this is their first album, to use a cliché, ‘they have paid their dues!’ Their songs have a really nice full sound considering they are only a trio, but a trio of very accomplished, experienced musicians. They are Steve Clark on drums, percussion, dobro, lap steel, casio, Hammond organ and backing vocals, Nigel orme on bass guitar, banjitar, acoustic guitar, harmonica, lead and backing vocals and Simon Middleton on lead and backing vocals, mandolin and acoustic guitar with all of the songwriting being credited to the band.
Those songs cover everything from death, love, lost love, lifes pressures and even a mothers love for her children. Not only is there plenty of thematic variety but also many tempo and style changes, even at times having an underlying bluesiness, despite everything being sung in English accents without any of the Americanisms that many feel compelled to use! As a guide I’d put their sound somewhere between the Pogues and the Band; the former because of the driving energy and the latter because of their instrumentation variations and the scope of the songs.
There is plenty of energy and no little skill in the way these varied songs are played and they deserve a lot of credit for managing those variations whilst still ensuring the album binds together as a whole This is at least part due to the fact that both lead vocalists have strong voices that avoid any American affectations and with the threesome managing some excellent harmonies the singing is pretty much covered. All of the songs are really well written, with no obvious filler and several of the stories being quite cinematic in scope, as in the case of album opener (Welcome to the) Promised land with it’s rasping vocals on a song that in a little over three minutes and short staccato phrases tells an epic cinematic story. Nobody’s fool is an epic mandolin driven folksy stomping song that includes bass drum thump and accordion. It has an almost Pogueish/Oyster Band feel and tells a story of a man, home from the sea, who can’t seem to help but two time his true love, whilst Lovers leap is a banjo rooted folksy Americana song on the lively side of mid tempo that tells a quite harrowing tale of a mothers love for her daughters. Summer lightning is also a  tremendous ‘Americana’ song with some excellent banjo playing on a sad story set in the Fenlands of Englands east coast. It could just as easily be termed an English folk song but it has much more of an Americana feel despite an almost Dickensian sensibility and is yet another song on this very good album that has a cinematic quality.
If you like incredibly well played, at times thought provoking, songs that stylistically can be categorized as either ‘English folk rock with Americana leanings’ or ‘English Americana’ you will be fortunate indeed to find a better example this year!