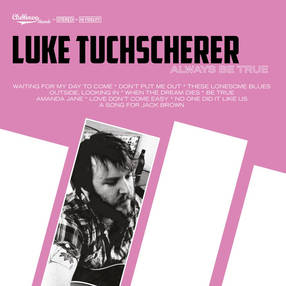 Luke Tuchscherer is a former vocalist and drummer with British alt. country band 'The Whybirds,' who made three excellent and highly rated albums between 2007 and 2013. This is the, now New York based, Englishman's second solo album, the first being 2014s acclaimed 'You get so alone at times that it just makes sense.' I won't bother you with quotes but when reviewing that debut I wondered if it was a 'one off' that simply fulfilled a band member's ambition or a serious attempt at a solo career. I hoped the latter and that is exactly how it has panned out with this even better follow up.
This hugely talented singer songwriter performs his songs with total conviction, probably not too difficult considering the uniformly high quality of his songwriting. The literacy of his lyrics and the superb arrangements lift the album above many who could be considered his peers but his greatest strengths are the warmth and quality of a voice that ensures he can master any emotion he wishes, perfect for his take on 'country music,' and the incredible melodies that are so catchy they will have listeners mistakenly thinking they are familiar with them. That is not because Luke is like many others; he isn't; it is just the sheer melodicism that often has you concentrating on the ear worm textures, saving your lyrical concentration for perhaps the next listen, or the one after, or .........! It is that sort of album; always fresh and quite captivating in its all round quality.
This album, if it needs a generic label, strikes me as having a 'country rock' overview although there are other influences that are brought into play, ensuring that, whilst in a loose genre in which so much comes across as samey, there is more than enough in Luke's work to set him apart from and above the pack. His songs range in tempo from slow and moody up to and including a speedy mid tempo ensuring the album contains plenty of variety.
Al ten of the songs were written by Luke and the bulk of it was produced, recorded and mixed by Tom Peters at The Den, Bury St. Edmonds, UK. Luke is fairly obviously lead vocalist on each song and also plays acoustic and electric guitars as well as drums on one track. Tom Peters handles drums and percussion on all of the remaining songs, with further help coming from a number of musicians who include B.J. Cole on pedal steel and dobro, with piano, organ and Wurlitzer variously played by Tom Collison, Bob Peters, Dave Marks and Lorenzo de Feo. Nick Malling, Taff Thatcher and Rob Butterfield all played bass with Dave Banks contributing much of the guitar and banjo work along with Ben Haswell who played on a couple of tracks whilst mandolin was courtesy of Max Milligan. Quite a mix of musicians but the flow is excellent and everything blends so well it could easily be a band all collected in the studio at the same time.
Whilst that blend and the flow is excellent it is an album of top quality songs performed by a singer songwriter who is at the top of his game and with the icing on the cake arrangements that couldn't really be bettered. The album opener, Waiting for my day to come, has an acoustic guitar intro on a song that has an incredibly catchy melody and builds to a powerful sound with steel guitar, bass, keyboards and electric guitars. The harmonies are restrained but still forward enough to strengthen and enhance the power of the song on a track that could easily be a hit single and yet despite the quality, it's not necessarily even the best on the album!  Outside looking in has a slightly unusual start with the solid percussion, steel guitar and guitar joined by piano on an excellent easy rolling ballad that despite the relatively gentle sound tells of the subjects frustration at the way his life is going. It is followed by a lovely slow reflective ballad in the form of When the dream dies with a beautifully solid bass and percussion and a melodic electric guitar chiming its way through the melody. There is a powerful and dynamic guitar solo that simply enhances the emotional content allowing Luke's vocal to meander its way through a questioning series of reflections. The guitar solo comes in again towards the end ensuring the song benefits from a perfect amount of colour and deep textures on a long meandering song that never outstays its welcome. The metronomic bass and thudding percussion get Be true, an upper mid tempo countryish rocker off to a flying start accompanied by Luke's vocal and a gorgeous dobro sound with sympathetic harmonies.
In moving his base to the U.S Luke is much nearer to the center of the various generic off shoots of country music and in taking this album along with him it's almost impossible to imagine our brothers across the pond not welcoming Luke Tuchscherer and his music with wide open arms!