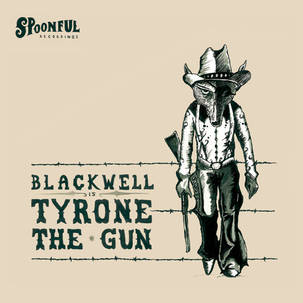 Tom Blackwell is a Manchester native who decided, as a penniless musician, to take himself off to the U.S home of the music he loved and further hone his style through the hard knocks that are inevitable for the travelling troubadour. He eventually landed up in Nashville where this album was born. It was actually recorded in Nashville and the North West England town of Salford, although the music has such an edgy American roots feel to it that you would never guess at the latter. Come to that even the Nashville portion was unlikely to have been made in the studios from which formulaic country music emerges on a regular conveyor belt.
Whilst the album will be 'promoted' as country music, alt. country or any of the other country linked sub genres there is a strong soulful element in everything on this tremendous recording. Not actually in terms of it being 'soul music' but his vocals are so strong and emotion drenched that the soul element will never stray far from the listeners' consciousness. His songwriting is also excellent but I think it likely that his distinctive vocals are what will, given the slightest opportunity, be more recognizable than most of the 'stars' of roots music, thanks to his ability  to manipulate them through a variety of themes, tempos and emotions.
That powerfully soulful edgy country music that is the albums most stylistically dominant feature is added to on occasions with maybe a leaning towards vintage rock 'n' roll and perhaps a bluesy r 'n' b feel, nothing that is overwhelmingly so, but just enough to let you know Tom has absorbed a variety of influences. All of this is underpinned by his soulful expressive vocal style that pulls everything together, giving this album that is quite diverse a lovely flow.
All eleven of the songs were written by Tom who also took all lead vocals, harmonica and guitars, Dickon Kyme Wright was on double bass, keyboards and percussion, Matt Wyman on drums, C J Hillman, pedal steel, with Jote Osahn and Dan Bridgewood Hill on strings. The opening song on the album, Broke, Bruised and Busted, gives an early indication that this is a 'country' singer who has far more strings to his bow than just the one. He shows his mastery over a song that evokes the early days of rock 'n' roll, albeit with a country leaning and not a million miles from rockabilly although less sparse, with his excellent warm vocal performance enhanced by a strong melodic arrangement. A lovely melodic steel guitar gets Book with a Missing Spine, a haunting ballad, off to an almost spooky start with Tom's vocal at its expressive best on a real beauty of a 'country rock' ballad. Toms husky soulful vocal slowly opens Coldest Man Upon the Earth with a little acoustic guitar and restrained steel guitar before the keyboards become detectable in the background. These are joined by a fiddle before the song eventually takes on an atmospheric country dynamic, even including the late arrival of harmonica, with a powerful arrangement on a memorable song. Lowly Roaming Man is an excellent country ballad that includes steel guitar on a song that rises and falls in dynamics, eventually given an epic feel with the harmonica's introduction extending the dramatic quality. The final song on this enjoyable recording is the title track Tyrone the Gun which provides a nice mellow sounding album closer, despite the strong lyrical story, with sparse instrumentation on an excellent tale. The song gradually draws in more instrumentation including restrained brass as it builds to its climax before slowing to just voice and acoustic guitar on a tale that has an epic cinematic quality.
Tom Blackwell has a very good chance of a successful career, perhaps even achieving stardom, because even if his songwriting ever falters (unlikely!) he can always fall back on his soulful vocals, which are more than sufficient to get him out of trouble. Add the natural 'edginess' that he possesses and align them with his arrangement and production skills (which he used alongside Dickon Kyme Wright and Matt Wyman on this recording) and you will struggle to find reasons for him not to succeed!