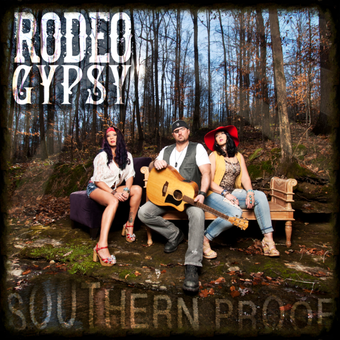 Long time friends Bridgette Powell, Becca Cummins and Dustin Michael first met in Nashville, having gravitated there from places as far afield as Oregon, Texas and Mississippi, a happy coincidence that led to them forming as talented a 'country' vocal and songwriting trio as I have heard for a very long time.
I rarely review e.ps but 'Southern proof' just had to be one of the few exceptions to that rule thanks to the quality of songwriting and performance by this hugely talented trio.
On one song they actually name check the 'Dukes of Hazard' t.v show, a world and a style that this trio would perfectly suit both musically, and from their photos, visually as well!
I've heard so much music over the years that stylistically at least has much in common with Rodeo Gypsy, but the difference is that most of it went in one ear and out the other as pleasant wallpaper music whereas this trio have something, in fact a lot, that is special giving their beautiful songs and performances a distinct but difficult to define 'edginess.' It is that 'edginess' which i've always felt is necessary to all music, particularly if it is to really grab my attention, but equally something that many, perhaps even most, of the big selling country superstars totally lack. This trio is proof that there is room in any recording for great beauty to be allied quite naturally to an edginess that gives each song a 'realness' rather than just providing a pleasant background that lacks depth and 'soul.' It is probably that powerful soulfulness that helps Rodeo Gypsy to create such an impact, negating the need to overwhelm the listener with a full orchestration when the vocals and songs are as good as the six on this recording.
I know i'm always banging on about that word 'edginess' but it is something that gives life to music rather than just being in the background and it is something that can't be contrived, in fact I have little doubt that the artists who have it are either unaware of its existence or if they are, don't know how they got it!
All three are excellent vocalists in their own right but their harmonies deepen the emotional impact and give their songs even more life, such is the power and beauty of their blend. The tempos and emotional content of the six songs are all varied, meaning that until such time as they release a full length album there is no problem at all in keeping this disc on repeat play.
The disc opens with Southern Proof, the title song and one that has a nice open sounding chiming acoustic guitar intro before a beautiful female vocal comes in with some gorgeous harmonies on an excellent song soon filled out by dobro, percussion and bass. The two female vocalists provide lead and harmony vocals that couldn't really be bettered, having beauty and just a little edginess that is eventually added to by Dustin's matching harmonies. Next up is a total contrast in Hangover on which Dustin is hugely impressive with his classic country style lead vocal and an instrumentation that starts out sparse with a little acoustic guitar and dobro and the two women providing beautiful harmonies, eventually joined by chiming guitar, percussion and bass as the song takes off. Finally, I Like You is an excellent sparky upbeat song that contains gorgeous, character laden female lead vocals with male and female harmonies supported by some excellent slide guitar on another tremendous song.
Until such time as they are able to record a full length album we will have to content ourselves with this six song recording that tantalizingly is just enough to whet the appetites of 'real country' music lovers but not quite enough to sate that appetite. If this is an example of what will hopefully follow, a successful musical future beckons and one that could even cross over into the mainstream if only the masses would realize that with music this good sanitization is unnecessary.