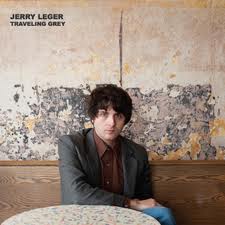 This is the fourth and possibly best album of excellent roots music released by this hugely talented Toronto native singer/songwriter. He has a similar vocal sound (but more tuneful!) to Bob Dylan at various stages of his early career but is most definitely not a copyist! His songs cover a whole gamut of emotions and variations on love, with an at times raw vibrancy that makes every one of these diverse stories totally believable, drawing the listener into the song and making you wonder what sound and style is coming next.
Much of his sound can be credited to his tremendous band ‘The Situation.’ Just listing the instruments they play gives a clue to the huge variety of textures that can be found on this recording. James McKie plays fiddle, guitar, banjo, dobro and saw, Dan Mock plays bass, Kyle Sullivan drums and Tim Bovaconti is on guitar, mandolin, ukulele, percussion, vocals and piano. The songs are all written by Jerry Leger and whilst they in the main relate to lost love he uses an almost philosophical depiction of what goes wrong with affairs of not only the heart  but also life in general. He leaves some of these stories hanging in the air, choosing to narrate events rather than to descend into clichéd conclusions. As a consequence of this and his style of writing, some of the songs have a truly epic quality, in particular the superb, over seven minutes of the hugely impressive drama of John Lewis, a tremendous and complex murder ballad with it’s eerily scratchy fiddle taking it into quite sinister territory. There are many stylistic changes within the boundaries of Legers excellent folk/country stories that gradually reveal more subtleties in this excellent album with each subsequent listen. Isabella has a nice walking bass line similar to the Tennessee three but on a very good slightly spooky broken hearted travelling song of a man searching for, but not finding, peace. This is immediately followed by East Coast Queen, a quirky sounding song with a similar ‘walking bass line,’ but also with fiddle, mandolin and acoustic guitar that tells a gently meandering tale of the circumstances surrounding a lost love! The title song Traveling Grey is an excellent acoustic guitar driven ballad that is a depiction of life and love whilst the tremendous album opener, Truth Is All Around You has a harsh edgy sound with it’s young Dylanesque vocals, driving acoustic guitar and brilliantly twangy dobro!
Jerry Leger has always been an excellent singer/songwriter but his songwriting has noticeably gone up another small notch on this exceptional album. Whilst his first album was good, there have been small improvements on each subsequent release, a sure fire mark of an artist challenged by his own excellence and long may he continue to be so!