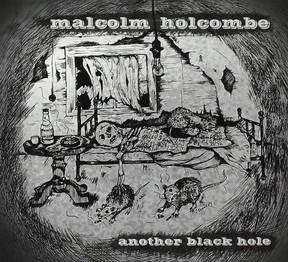 As the New Year gets into its stride it's an early start for what will inevitably be one of 2016s highlights. For many years now every new release from Malcolm Holcombe has been anticipated as perhaps his best ever and maybe even his career defining album? Such was the case with this tremendous recording that has all of his usual hallmarks of high quality writing, hugely evocative vocals, exquisite melodies and an all round edginess that whilst natural to this man, is something few others can achieve. It's only when you perhaps listen to some of his other recent albums that you realize that it is not so much a case of being his best or 'career defining' but is actually more a question of maintaining a peerless standard that you can't help but feel is not really humanly possible!
We all talk about genres of music and the difficulty with some albums of trying to give the record buyer a comparison that will help them decide on whether to purchase a recording (or not!) but as with his considerable back catalogue there is no other artist that Malcolm can be compared to. Certainly there is a lot of country music, blues, folk and probably much more, even including on occasions a little old timey 'front porch' music in what he does. The problem with giving him a label is that all of these various genres are mixed together in varying degrees with perhaps individual songs leaning a little closer to one genre or another but never exclusively so making it impossible to slot him into a nice comfortable genre.
It is obvious to his ever increasing band of listeners that Malcolm is a man who writes without any thought of genre, simply getting his often poetic story songs, many of them cloaked in darkness, out to the listener and leaving any labeling up to them. His style is completely natural and totally lacking in any artifice ensuring he is not only unique but also powerfully compelling, dredging sympathy out of the listener that most other vaguely similar artists struggle to get anywhere near. He has the ability to write appealing, memorable melodies that often have a lovely light feel and amalgamate them with some deep dark, but thoughtful, lyrics with his always raw vocal style contrasting beautifully with those melodies.
Malcolm wrote all ten of the songs on this album that vary from hard hitting darkness to tender ballads, all composed with his usual blend of extraordinary descriptive writing and high quality literacy. Whilst he is not an avid user of metaphor, some of his songs can take time to unravel and it is that which adds depth to the recording and repays the listener for his/her patience, a state of affairs that has existed throughout his career.
The album was produced by Ray Kennedy, a man who has taken over production duties on a few of Malcolm's albums so is well versed in the intricacies of this true originals musical requirements. It is not only the producer who has become a regular, with help also coming in the form of a number of top notch musicians who have worked with Malcolm before. There is Jared Tyler on guitar, banjo, mandolin, dobro and backing vocals, David Roe on bass and Ken Coomer on drums, with Tony Joe White playing electric guitar on many of the tracks and Roy Wooten adding his percussive flair.
The album opener, Sweet Georgia gets things going with banjo, guitar and percussion eventually joined by the dobro on a song that musically at least has an easy rolling feel although it is in fact a sad tale of loss. Malcolm's vocal seems, despite the usual raw edge, to have taken on more warmth on this sad reflective, musically upbeat tale. This is followed by the deep dark Another Black Hole, where the seedy side of life on the wrong side of the tracks is accepted as the norm, with driving bass, percussion and a sinister sounding electric guitar on a darkly atmospheric tale on which his vocals are at their raw and most evocative best and the arrangement equally full of darkness. Next up is To Get By, another easy rolling tale musically, with thudding bass, tuneful guitar and percussion on a song that is reminiscent, at least for me, of Guy Clark. Don't Play Around is propelled by a deep powerful bass, percussion and dobro on a dark swampy tale, with his seemingly whiskey soaked vocal full of an almost sinister gravel on a tale that pulls no punches. Finally, Papermill Man is led by a thudding percussion and electric guitar giving the song a swamp rock feel in much the same way as classic Tony Joe White, although there is more darkness to Malcolm's music and his straining vocal creates a much mistier, sinister atmosphere, with some tremendous female harmonies dragging the song towards a powerful New Orleans feel.
So, is this album his best ever or maybe even career defining? It's tempting to say it is but that would be because the songs are still relatively new to me and would be a putdown of everything that has gone before. The fact is that every album he has made for many years is his best ever and each of these tremendous recordings defines this genuinely unique musician's career.