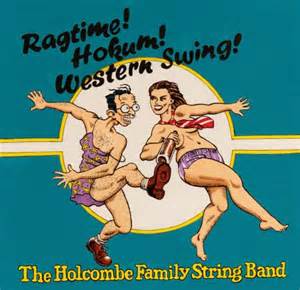 There is probably not too much that needs to be said as a description of The Holcombe Family String band's debut album, 'Ragtime! Hokum! Western Swing,' because the title gives a perfect summation of what this excellent British band are about. They even dress to suit the music which, without hearing them, could have raised the possibility that they merely caricature these old music styles, but fortunately they have talent to burn and a tremendously authentic feel for the music they play. To those three styles can be added country, jazz, blues and even a little 'hillbilly,' some of the songs even blending several of those styles to form their own uniquely original sub genre.
The band consists of C.D. Wallum on lead vocals, guitar, tenor banjo and kazoo, Rob Bromley on violin and backing vocals, Felipe Petrie, double bass and backing vocals, Francis Watson on washboard, drums, percussion and backing vocals, Jonathan Scully, trumpet and Benjamin William Pike on pedal steel guitar. The ten (plus one hidden at the end!) songs on this hugely entertaining album were all written by C.D. Wallum, a man who has obviously studied these various aspects (and probably more) of American roots music and has grasped, as have his band mates, what needs to be done to give the music a modern update but at the same time keep it authentic.
Whilst this recording is not sparse, many of those old 1920s and 30s string bands, particularly the 'western swingers' used far more instrumentation than on offer here and because of the generally clear open recording there would be no place to hide if their talent was insufficient. Fortunately their talent is more than sufficient and there is a tremendous drive to everything they do, with even the ballads having a strong up front projection that gives the album a much greater appeal than if they showed more restraint.
The album kicks off with Hard Times, a song that sets the scene with a nice jazzy trumpet and banjo along with guitar, fiddle and bass, allied to an excellent vocal from C.D. and band harmonies that help to create an old time atmosphere but their 'feel' is what makes this and the following songs so easy to listen to. It is difficult to fit the song into a particular genre containing as it does a jazzy feel, a little blues, even an element of hokum which when added to several  other blended styles are what rubber stamps the level of talent contained in this band who don't seem afraid to tackle anything. River, Black River includes a lovely fiddle and steel guitar that get this gorgeous 'country' ballad off to a flying start with a tremendous lead and harmony vocal for company! Whilst modern in sound it is so reminiscent of the old 'country and western' songs of many decades ago and whilst the slow moodiness creates a dark atmosphere it is a strangely uplifting and outstanding song. Another excellent slow song is Once I Was A Navy Man, with its atmospheric percussion, trumpet, violin and steel guitar with some stormy effects providing a quite haunting atmosphere on a ballad that slowly meanders its way through to its conclusion. On my copy of the disc the recording levels seemed to decrease slightly at times but if this is universal all it does is makes the listener concentrate a little harder, something that ultimately repays the listener. The Captain is an excellent speedy country song with violin and steel guitar supported by percussion, bass and guitar on a tremendously melodic tale on which the vocals are outstanding as is the hook, with the harmonies adding much to the song that probably has the catchiest melody and vocals on this excellent album. The final song on the album is You're My Woman Now, a tale that has a nice banjo and violin assisted by bass and percussion on an excellent slow ballad with very good harmonies on the chorus. Eventually a muted trumpet joins in almost giving a late night jazzy feel were it not for the just as strong vaudevillian atmosphere, something that helps define this band in the way they are able to blend various musical aspects to suit their own pretty much unique style.
Perhaps due to artists ability to get their music heard, thanks in the main to the internet, there seem to be far more bands who blend and play music, some old some new, in the various sub genres mentioned above, than since the ability to record was in its infancy. Because of the idiosyncrasies of those various styles an authentic atmosphere is an absolute necessity and when you add the sometimes odd blend of instruments anything believable can only be achieved by artists of quality who have a deep feel for the music. Some that spring to mind are from America, artists such as Woody Pines, Sheesham, Lotus & Son, Jack Klatt and a few representing Britain such as Rob Heron and the Tea pad Orchestra, but now to those talented bands can be added The Holcombe Family String Band.