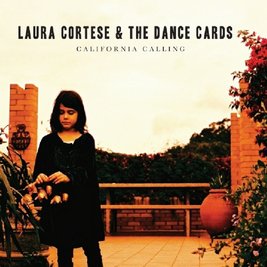 Laura Cortese fiddle playing harks back to the 'high lonesome' old timey sounds of eight or nine decades ago as do at least parts of the arrangements, with her voice providing a beautiful contrast as a product of the 21st century, with all of the influences a talented young musician will have gathered through her life. She can never be accused of trying to recreate the music of the old 'hillbillies' despite her music having much in common with them, certainly more than most of today's 'mainstream country' musicians. The excellent 'California Calling' is very much 21st century music that pays subtle tribute to the genres originators without enslaving Laura to those sounds but still keeping the sometimes spooky, haunting elements more through the depth of feeling and arrangements than any attempt at emulation.
Her influences are wide ranging and have obviously been absorbed from a variety of genres and sub genres but her fiddling embeds her foundations deep in 'roots' music. At times some of these songs appear to be veering towards a more commercial strain of music but something always happens to pull the song back into an often strange otherworldliness, thanks in the main to the often experimental feel of some of the arrangements. As this talented musical collective pulls away from the mainstream the 'old timeyness' seems to be more pronounced, but it's usually not very long before the song will take flight and go off into a completely different direction. Many of those songs have an ambient feel but it is a feel that includes regular and varied interventions that break up anything that could be described as 'smoothness,' keeping things interesting and the listener slightly off balance. On the face of it Laura's voice is 'sweet' but it is a sweetness that is full of character and, believe it or not, a distinct otherworldly edginess, that alone makes her instantly recognizable. Add to that the incredible originality of the arrangements, the superb playing and the deep and stunning harmonies along with excellent songwriting and beautiful melodies and it's difficult to imagine how it could be improved upon. To me at least this is Laura's best album.
The band lineup consists of Laura on vocals and fiddle, with Valerie Thompson on cello, Jemma Moynihan plays fiddle and Natalie Bohrn was on bass although those duties are now handled by Emma Smith; Sam Kassirer played keyboards and also produced the album, whilst all of the women contributed to the exquisite harmonies as well as various other instruments and hand claps. Of the eleven songs on the album eight were written solely by Laura, one is traditional, one was by Taylor Ashton and the other by Laura and Jemma Moynihan.
Every song on the disc contains a haunting, often otherworldly, eeriness that when everything else is taken into account creates a completely unique sound in what is basically a genre of one, albeit one that contains recognizable elements of so many 'roots' sub genres sprinkled with a little 'angel dust' that allows the recording to be both beautiful and edgy at the same time. The thudding bass and plucked fiddle gets things going on the album's title track California calling, soon joined by Laura's lovely lead vocal on a song that has quite a spooky otherworldly edginess. Eventually the other women come in on harmonies and as the song progresses and the sound deepens the eerie atmosphere is enhanced and extended into a sound that has some of the haunting elements found in old Appalachian music but in a modern, or even future, day setting. On the incredible Three little words intro is by way of some beautiful a cappela band harmonies that are soon joined by a classic 'high lonesome' fiddle sound that in turn leads to Laura's beautiful lead vocal, all supplemented by a suppressed piano and percussion. This is one of those songs that has so many powerful yet diverse elements working together and ranging from echoes of an old British Isles folksy atmosphere, to the high lonesome sound of the Appalachians, a little modern country and even a worldliness that is currently known as 'world music.' It is a quite stunning song and one that has so much more than just the restrictive comparisons above.
I suspect it will be a very long time before any listener can predict what comes next on this remarkable, unique album that seems to defy efforts to absorb all it has to offer, in fact, I suspect it may never happen such is the originality and diversity in these 'grooves!' That last word is assuming you have managed to get a vinyl copy, and it will be well worth the extra outlay to enable you to hear this tremendous album in all its glory! This is an album that will repay the listener however many times it is played. I have played it quite literally dozens of times and it is still revealing little nuances that I hadn't picked up on previously. If that is not excellent value for your expenditure I don't know what is!