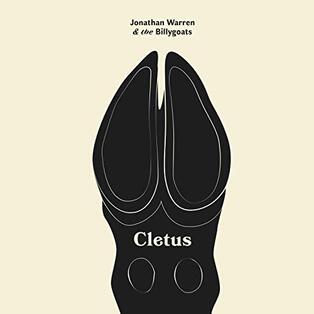 I doubt that anyone hearing this tremendous album will describe Jonathan Warrens vocals as an instrument of great beauty, but, and it's certainly not a big but; Jonathan probably has one of the most evocative voices around, think a more melodic Tom Waits! Add to this the clarity and consistency of tone that can be both threatening and warm and with the other band members able to create some excellent harmonies the blend is perfect for these brilliantly thought out songs and arrangements. Add the bands excellent playing and this is pretty much a match made, if not in heaven, a quite dark yet highly selective otherworld where dark 'hillbilly' music has been blended with a number of other country roots genres into a completely unique stew. On their 'facebook' page the genre this tremendous band describe themselves as working in is 'Progressive Psychobilly Folk Grass,' a generic field of one that is impossible to argue with.
The only constant over their five albums (including this one) is Jonathan Warren himself but each and every lineup has worked well with his songs, that whilst often dark are based on the real world rather than bland boy meets girl, boy loses girl fiction. The lineup on this album was Jonathan Warren on guitar and upright bass, David Henry on cello and backing vocals and Steven Morningstar on banjo and guitar. Of the songs, nine of the ten were written by Jonathan Warren whilst Follow was written by Steven Morningstar and they range from an almost rural 'hillbilly' feel to virtually anthemic alt country; in a nutshell, something for everyone whatever your taste in the edgier side of 'country music' and just so long as you don't mind a little darkness in the mix. I won't even try to compare this trio to any other band; suffice to say that it is not only Jonathan's vocal that sets them apart but also the arrangements of these excellent songs. The overall feel has an otherworldly atmosphere, much of it brought about by the subtlety of those arrangements that blend and work beautifully with the vocals, both lead and harmony
It's difficult to give any sort of definite description of most of the songs because even after numerous plays they are still revealing little nuances that were not noticed on previous listening sessions. The album opener Queen Anne Hill starts with the banjo and guitar leading to Jonathan's hushed, spooky voice that gradually takes on an otherworldly feel as he evokes the story. The banjo continues as the lead instrument but with bass and drums laying a dynamic, solid foundation with acoustic guitar weaving in and out of this excellent song, all combining to allow Jonathan's vocal free rein. There is a gentle acoustic guitar intro on Salted air that is soon joined by banjo and occasional chiming electric guitar with Jonathans quietly restrained vocal on the verses and band harmonies on chorus, all with a subtle cello adding to the atmosphere. Despite the excellent melodic arrangement, as with most songs on the album, the atmosphere is one of reality rather than fantasy. There is an excellent percussion and banjo break as the song progresses, again an idea that slots this band into a genre of one, and despite the fact that there are myriad country offshoots in their music along with perhaps a slice of blues. Lead vocal on Follow, a deeply atmospheric song with dark overtones is Steven Morningstar who also wrote it. Jonathans vocal and drum accompaniment is also there with some sinister sounding electric guitar lines adding to the otherworldly feel. The intro alone has an otherworldly feel on Done fell down, with a treated electric guitar and piano supported by acoustic guitar and Jonathan's vocal at its expressive best on a song that creates a deep eerie atmosphere. Whilst not all acoustic there is a powerful, sinister backwoods feel in the arrangement in a similar way to the atmosphere of the 'Deliverance' movie, despite the lyrics not echoing those sentiments. Eventually the banjo comes more to the fore further adding to the atmosphere of this song that reveals more each time it is played, no matter how many times. Stayed too long has an acoustic guitar intro with Jonathans restrained vocal before banjo and cello come in deepening the atmosphere on an excellent song. The blend of cello and banjo alone create a sinister feel as the lead changes eventually with the banjo dominating and Jonathans lead vocal latterly supported by ethereal ghostly harmonies as the song builds to a crescendo.
I wrote a fairly positive review of the bands 2016 album 'Bless my soul,' but this new release, at least to my ears, is a considerable step up in quality. It is stylistically similar but the playing is much tighter and of course Jonathan Warren's vocals will always be easy to distinguish from most of his peers. Add in the fact that the songwriting is of a high quality  and it becomes obvious that hugely successful careers have been built on considerably less.