THE MOST UGLY CHILD - COPPER & LACE
​ 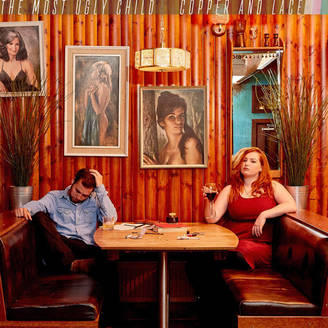 This is a British band that has a genuinely powerful and quite natural feel for real country music. Whilst there are gorgeous melodies, there is also an 'edge' to everything they do, hence the 'realness' of their music, in a similar way to Gram and Emmylou rather than some of the heavily sanitized 'mainstream' duo albums. So much of what the band performs is easily pictured in a classic 'honky tonk' bar of old and I can imagine that with the sort of quality they have everyone would be too busy dancing to even think about fighting!
The Most Ugly Child (a strange name because I can't imagine any of them actually were!) are a six piece band with the focal point being the songwriting and vocals of Daniel Wright and Stevie-Leigh Goodison with Matt Cutler, percussion and vocals, Max Johnson on double bass and vocals, Nicole J. Terry, fiddle and ‘Big’ Jim Widdop, pedal steel and dobro. Their influences range from Hank Williams, Townes Van Zandt and George Jones to Tom Waits and Led Zeppelin and if there is any sort of surprise in this list it is the non addition of Gram and Emmylou, such is the quality of their duets. The construction of their music is different to the latter pairing but their duets have the same edgy appeal and whilst this is very much a 'country band' there is much more to their music than the bland formulaic constructs of the mainstream. There is an edgy 'realness' to everything they sing and play, letting the listener know this band is playing and singing with a natural depth of feeling rather than having been subjected to any overt polishing or sanitization.
Both vocalists are excellent and have the ability to portray myriad emotions from upbeat and up tempo to slow and mournful, a range essential to country music but not always apparent even from the biggest of 'stars!' Their songs are varied with most having their roots in the various aspects that are linked to love whether lost or found, but every performance has a hugely appealing edginess that makes the depth of emotion real and heartfelt. Of the twelve songs, eight were written by Daniel Wright, two by Stevie-Leigh Goodison, a tremendous version of Townes Van Zandt's Lungs and one by the hugely talented singer songwriter and friend of the band, Daniel Meade a man whose last two albums have been reviewed on this site and made it into my best of year lists.
The album gets under way with What might have been, a song that opens with 'barrel house' piano and had me thinking 'is this a blues band?' but within a few more seconds a strong and quite addictive country duet was unveiled. The dynamism epitomizes 'honky tonk' and both vocalists are strong and evocative with the guitars, bass, gentle percussion, piano and the gorgeous steel guitar all beautifully played by this incredibly tight band. There is a gentle acoustic guitar intro on Roses that is soon joined by Daniel Wright's excellent vocal with percussion and fiddle not far behind. There are gorgeous, emotion drenched harmonies from Stevie on the chorus of a slow, incredibly moody song that is interspersed with piano and with subdued steel guitar adding to the emotion of the song as it blends beautifully with the fiddle. Paper, linen, copper, lace is an excellent duet, with steel guitar and banjo to the fore and the two vocalists bringing different qualities to the song, again in the same way as Gram and Emmylou. It is an 'in your face' edgy country song that has the fiddle working in and out of the mix on this incredibly dynamic tale that thanks to the performance of all concerned has a slightly unsettling feel that is absolutely essential to a tale this powerful. Their version of Townes Van Zandt's Lungs is incredible, getting underway with a banjo intro, joined by sawing fiddle, throbbing bass and strong percussion leading the duet vocals in on an intensely harrowing song with dobro providing a little beauty on this lyrically intense tale played at just above mid tempo. The steel guitar and bass start The bottle and the fall with Daniel's lead vocal and Stevie's harmonies on a dramatic, sad tale about the price paid by the protagonists of a relationship ended by too much alcohol.
The arrangements of these twelve songs couldn't really be bettered, with every sound being essential to the feel of the album, whilst the playing is natural and of the highest quality leading me to think that if this lineup can stay together and have a little luck or promotion, huge success should be guaranteed. Of course we know that life has a habit of being unfair but it would be tragic if a band making music of this quality were allowed to drift into oblivion whilst much less talented manufactured 'stars' are able to thrive. Time will tell, but I can't wait to hear their earlier e.p and am straining at the leash to see them live or get their next album. Buy this album, give it a listen and no doubt you will be as hooked as I am!