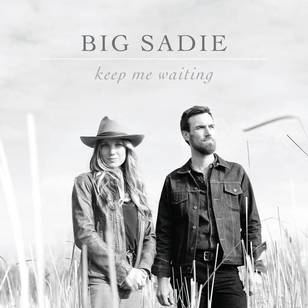 On the face of it this is one of those albums that could easily be described as 'bluegrass' but as is so often the case anyone choosing to do so would be selling this excellent recording short. There are bluegrass influences in their music but there is so much more, including old timey, folk and the myriad of influences that the duo have absorbed as they go through life, all being distilled into a brew of the highest quality. Certainly stylistically many other duos/bands have followed and continue to follow a similar path, but this band, which is now a foursome would be difficult to surpass for the combined quality of their vocals, arrangements, writing and playing.
This is an excellent debut album from Chicago based Big Sadie founders Elise Bergman who is on upright bass and vocals with Collin Moore on guitar and vocals. They are joined by Andy Malloy on banjo and vocals and Matt Brown plays fiddle and vocals with long time friend and collaborator Jess McIntosh helping out with harmony vocals on the title track. Of the songs, six each were written by Bergman and Moore although I suspect there may well have been some overlapping and assisting each other rather than being written in isolation. Seven of the songs have Elise on lead vocals with her beautifully evocative, yet down to earth style, with Collin on four and there is one excellent instrumental. The diversity of the album is increased by both vocalists ability to not only capture the essence of their compositions but also their ability to switch between the various sub genres whilst still locking in to the bands natural style that is always recognisable despite the variations.
The album kicks off with a chugging guitar, fiddle and banjo on Danny and is soon joined by Elise's lovely laid back vocal on a really good song that sets the scene for the album beautifully. Colin comes in on the chorus with harmonies on this song that has an easy going feel but with a distinct edginess brought about by a lady who likes to 'play the field.' The easy going feel of the music actually emphasizes the dramatic content of the tale.
On Only you the fiddle and banjo get things started with Elise's vocal soon coming in on a song that has a strong 'high lonesome' feel with a bluegrass edge. Again, Colin adds excellent harmonies and there is an atmospheric banjo solo during the song with the fiddle wending its way through the tale eventually relieved by an acoustic guitar solo before the fiddle takes over again. Before morning is a complete change as Colin takes over lead vocal duties with Elise joining in on harmonies strengthening the bluegrass feel. Nice banjo, guitar, fiddle and bass backing them up on an excellent 'leaving' song but one on which the 'mistreater' pleads with her not to go. A tuneful acoustic guitar gets things going on Corn liquor an excellent composition that has the feel of a traditional song with Elise on lead vocal and Collin and other band members adding harmonies. Gradually the bass becomes more obvious and is joined by banjo and fiddle as the song takes on a much fuller and more dynamic sound. Finally, we have Collin on lead vocal on Same for me, with a nice acoustic guitar sound for company and the restrained fiddle in the back ground. The occasional heavy bass notes deepen the atmosphere on a song that has a high lonesome feel as the fiddle comes more to the fore with banjo in the background. It is a song that has a haunting feel, with Elise on dynamic background vocals, and an almost cinematic warmth to the music with a strong narration by Collin as we progress through the tale. It is a composition that moves fairly slowly but with a strong built in dynamism that enhances the power.
Ultimately, as I said earlier, the variety of styles both combined and individually on this recording have all been blended before. What helps is that those styles are never blended in exactly the same way, ensuring that, certainly on this recording, there is a strong sense of individuality as well as originality but whilst Big Sadie may vary their blend of influences from song to song they put their own stamp on everything, giving them an all encompassing and recognizable style of their own. It will be interesting to hear where their next album takes them; I suspect it won't be too far from this one, after all there are blends of their influences and styles that I suspect can bring further variations to their 'roots music' as they spread themselves further across the field they have begun to plough with 'Keep me waiting.'