HAT FITZ AND CARA - AFTER THE RAIN
​ 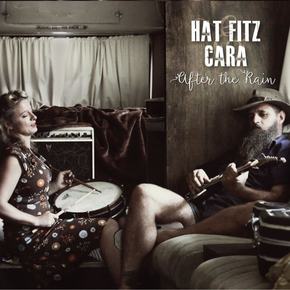 Prior to the four albums that Hat Fitz has made with his wife, Cara Robinson, he had been playing live and making some excellent raw solo and band albums since at least the early 1990s. In fact I've been aware of him for at least twenty years having purchased an album released in 1995, but to try finding any of those solo releases now or even information on them is a difficult undertaking. It's a shame because they were good albums that were an excellent precursor to the recordings with Cara. His melodic guitar sound has always contrasted beautifully with his raw evocative vocals but for those who expect some sanitization having 'taken a woman on board,' forget it! The appealing rawness is still there it's just that he has broadened his sound with the femininity and incredible vocal dexterity of Cara, making his music more rounded and hopefully widening the appeal.
Back in 2012 I wrote a rave review of their album 'Wiley Ways' and made it one of my albums of the year, believing the raw and ragged blues it contained came as naturally to this talented couple as breathing. The nine excellent songs on this new recording are the equal in quality and were all written by Fitz and Cara with Fitz on vocals, guitar, resonator guitar and mandolin and Cara on vocals, vintage drums and washboard. Fitz's solo albums were always recognizable as containing mainly deep rural blues all played and sung with a raw earthiness but Cara has brought a slight change of perspective with her powerful soulful vocals that blend beautifully with the raw driving, if melodic, guitar work of Fitz. The expressive depth of his vocals is always apparent, whether he takes the lead or adds harmonies. In a nutshell; it's difficult to imagine how any other couple could come even close to matching the power and variety, albeit within the wide boundaries of blues and soul, of this duo who continue to broaden the scope and power of their music.
The album gets underway with Going home with its lovely, almost over amped guitar sound, with the thudding percussion and Cara's beautifully dynamic manipulative vocal that often, at least to me, sounds a little like Bonnie Raitt. There are some excellent harmonies from Fitz on the chorus of a song that has a powerfully soulful feel. It is followed by the gorgeous sound of a mandolin and resonator guitar from Fitz on Doing it again, allied to Cara's dynamic percussion and her evocative vocal with Fitz again harmonizing on the chorus. He takes over lead vocals on Tank man, with his dynamic guitar and Cara's drum sound allowing his vocal to exhibit the depth and raw power it has always contained. Finally, on Try, there is a lovely melodic, as well as quite unusual, guitar sound supporting a dynamic, soulful vocal from Cara who eventually brings her drums in increasing the already dynamic sound, eventually finishing with a powerful crescendo.
As is usual with descriptions of music nothing is quite as simple as it appears on paper. Whilst this recording is rooted in the blues and to a barely lesser degree soul, most will come to the conclusion that this duo can really rock as well as bringing numerous other elements of roots music and their broad range of influences to their sound as you would expect, having grown up on opposite sides of the world and differing cultures. It is albums like this that prove once and for all that you don't need to have grown up in the Mississippi delta to play the blues, in fact it's not even necessary to hail from the U.S. Fitz and Cara hail from Australia and Ireland respectively and not only play authentic sounding blues but they stamp it with their own deep soulful style and in the process bring a large helping of originality to the genre