THE BOOMSWAGGLERS – THE BOOTLEG BEGINNINGS
(from the Shack Out Back) 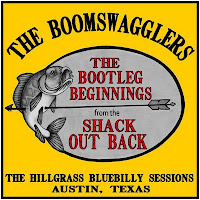 This ‘hillbilly’ band hail from Georgetown, Texas and sound about as authentic as any band i’ve heard in a long time. Their ramshackle, edgy punked up ‘hillbilly’ music has a genuine intensity with an at times hauntingly evocative atmosphere made more real by the lyrics and brilliant instrumentation. Those lyrics, which have apparently got them banned at several of their local venues, are probably not for the sensitive, but then again nor is their raw edgy music. Having watched a few pieces of video makes me think that what you hear live is pretty much what you get on c.d. i.e. high energy, lo-fi, deep, old timey country music.
At present I’m not even sure exactly who is currently in the
band, with their ‘reverbnation’ bio having them down as Spencer Cornett on lead vocals and guitars and Lawson Bennett also vocals and guitars, so presumably they share duties on other featured instruments such as banjo, bass, dobro, fiddle, accordion on this excellent debut album. The video has Cornett as the mainstay and with Steven  Bracamontez on lead guitar and  Natalie McDougall on drums. Hopefully my request for more information will turn something up but meantime a lack of info. won't affect the pleasure of listening to this album.
The songs are all written by the band and consist of tales of having a good time, alcohol, drugs, generally not giving a damn about what anyone thinks (apparently a philosophy they carry over into their every day lives!) murder and suicide, with these last two actually appearing in one song. The impression is always, after many repeated listens, one of a raw uncompromising album by people who harbour no illusions or desire to join the mainstream and despite some heavy themes there is always a feeling that there could be elements of tongue in cheek without actually having any comedic elements. The instrumentation is perfectly chosen to
suit the songs and the playing always sounds good, despite the distinctly lo-fi recording that could easily sound derivative of the old timers, but doesn’t, simply because this ‘bootleg album’was made with virtually no budget, which perfectly complements the raw elemental music.
Cornett’s vocals have plenty of nasally untutored twang and a punchy attitude as befits an album such as this. Whilst there is plenty of fire to the songs and many of the stories are hard and uncompromising
their use of the instruments such as banjo, fiddle and particularly accordion seems to give a slight softening of the attitude, possibly intimating just a tiny amount of sympathy, but just as this feeling starts to firm up, back comes the fire. The album kicks off with Low
down areally good driving ‘hillbilly’ song with banjo pushing proceedings along, with the help of electric guitar and fiddle, on a story about basically having a good time whatever the cost. This is followed by Workin’Man a really good dobro led song with an excellent walking bass line about the ‘joys’ of being a ‘working man,’ but probably the most evocative song on the album is the murder/suicide ballad Trailer Park Special a harsh tale with some tremendous banjo and fiddle playing. I’m
comin’ home has some nice twangy dobro on a song that veers towards raw 1950s ‘rockabilly’ and with Mornin’  Pills having some gorgeous accordion on a brilliant, if sad story, with a nice fiddle break and excellent harmonies that could be a story of drug addiction, gives the album tremendous instrumentation variety despite the sparseness. There is an echo laden dobro onWilco blues, bemoaning the hot Texas weather, that really does evoke a blisteringly hot dry desert atmosphere, probably matching Trailer park for it’s intense depth of feeling.
Ultimately a tremendous album of‘real country music’ that is
about as far from the easy listening country pop so beloved of the ‘mainstream’ as it is possible to get. I for one hope this tremendous duo/trio haven’t burnt themselves out and do actually make a second album. That should really be something!