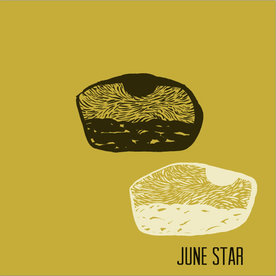 The first June Star album I heard was 2002s now classic (at least in my world) 'Telegraph.' They had released two albums prior to that tremendous recording and this new release is their tenth, although it could be argued, justifiably, that at just five tracks and fourteen minutes this is an e.p. I rarely review e.ps but this is a June Star e.p and any June Star release is a huge event!
Their sound has changed a little in those years, perhaps now a little more sparse and with steel guitar, rather than playing a supporting role, often taking the lead. What has remained completely unchanged are the vocals of singer, songwriter, guitarist Andrew Grimm. They are and have always been both warm and raw, and with an expressive world weary acceptance that gives the impression of all of his songs subjects being a little downtrodden but reluctantly accepting their place in the great scheme of things. Because of the depth and feeling that goes into his singing he has one of the most recognizable styles in any music, but certainly in the alt. country field that June Star have always inhabited.
The lineup has varied over the years, with the Baltimore based bands core being Andrew Grimm on guitars, bass, harmonica, percussion and drum programming with the extraordinarily gifted Dave Hadley on pedal steel guitar. The pair are often accompanied by Andy Bopp on bass and Kurt Celtnieks on drums and percussion, the four bringing a density and power to Andrews poetically descriptive songs that much bigger bands would struggle to project. Generically they can be placed alongside a band such as Son Volt, having much in common with Jay Farrar's esteemed band. They are certainly the equal when it comes to talent, but what distinguishes June Star is their instantly recognizable sound that they adapt to the most aching ballads and up tempo country rockers, much of that recognition coming from the use of the steel guitar and of course, Andrew Grimm's emotion drenched vocals.
The recording opens with You're Still Here a song that moves at a slow almost funereal pace with the gorgeous uplifting steel guitar accompanying Andrew Grimm's emotional vocal with gentle, sparse guitar, restrained percussion and bass laying a perfect foundation. It is followed by the slow wistful Almost Home a song that has a memorable melody with the lead vocal perfectly complemented by steel guitar and with the eventual inclusion of a warm melodic guitar break with harmonica for company. proceedings are lifted to an almost mid tempo on Way Off, with chugging chiming guitars, solid drums and bass supporting the evocative lead vocals on another beautifully written, arranged  and performed song.
Anyone who has never heard June Star and who is introduced to them via this warm melodic and varied recording, despite its brevity, as well as possessing plenty of grit, can't really fail to become addicted to their music and hopefully will go on to investigate one of the finest back catalogues in the broad generic field that includes alt. country and June Star at its fulcrum.